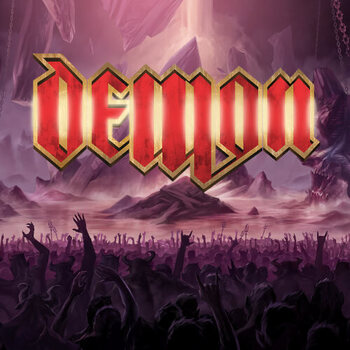 Produced by
Play N Go
Demon slot is here to rock your world with some infernal madness with this latest slot by Play 'N Go. Demon is unashamedly dark and demonic, and to add a unique twist, is based on a British metal band of the same name. Formed in 1979, the band is notorious for its heavy metal sound, and this slot has its own jukebox with seven songs to select from while spinning the reels. There's also a bonus song called 'The Devil Rides Out' recorded exclusively for this slot! Apart from the music, this slot is packed with awesome bonus features and some truly wicked gameplay, so let's take a trip to the depths of hell!

The Demon slot online game features a 5x3 grid pattern with 30 active paylines. When you play Demon slot online, you will be playing with an RTP of 96.50% and it is one highly volatile game so keep that in mind. You can start spinning from as little as 0.30 credits going all the way up to 90 credits per spin.

The reels consist of the usual 10 to A card symbols, but the design used here makes the letters and numbers look quite gothic. Apart from the card symbols, there are the higher value symbols, consisting of stone statues covered in ivy, masked demons, leering gargoyles and gothic-style crosses too.

Keep your eyes peeled for the infamous singer of the band Demon himself when you play Demon slot, who will give you ten times your stake whenever you land five in one combo. The golden skull of Baphomet is the Wild in this slot, however, it will only appear on the third reel, and it can substitute for all symbols except for the scatter.

This feature is one of the best when you play Demon slot online, as it could award you with some great bonus wins. This feature is activated when the Wild amulets show up on reel one and five whenever the Wild mask symbol is on the middle reel. If the Wild mask hits the centre of the reel you will be rewarded with eleven free spins!

Do not fret if you land the Wild mask on the top or bottom of the reels, as you will receive six free spins. During this feature, you can also take advantage of a win multiplier, with a value of 2x, 3x, 5x, or 8x which will be selected randomly on every spin.

Wild Mask
This feature is only activated on the middle reel and it will transform any of the singer symbols into Wilds whenever it hits, which is sure to get you some great wins.

You can unlock this feature if you land both of the Wild amulets on reel 1 and 5. You will start off with four to eight spins, but if the Wild mask appears on the middle reel, you will be rewarded with six to ten spins. You can win up to 2,500 times your stake during this feature!

The symbols in the reels are just as dark and spooky as the rest of Demon slot, with symbols representing the various creep-tastic things that are present in our world. From sullen-looking, ivy-covered angel statutes to golden red-eyed goat skulls, the symbols will not let you down in terms of their dark and demonic factor when you play Demon slot. The overall colours used in this slot perfectly represent the demonic vibe of this slot, with a mix of violet, purple and fiery red.

Demon is one dark but devilishly good game, with some fun bonus features and rewarding gameplay. The inclusion of the band's soundtrack is a unique twist and this slot will enchant you with its gameplay.