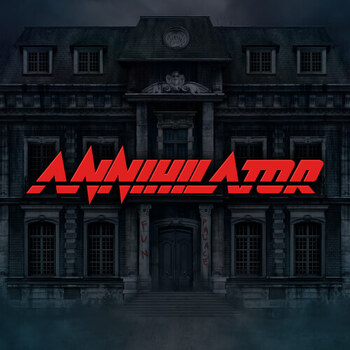 Produced by
Play N Go
Annihilator slot online is a metal band-themed five-reel, three-row, ten-payline slot game. This game includes three bonus features. The Annihilator game accepts bets ranging from 0.10 to 100 per spin which is good for both high-rollers and beginners. Annihilator slot is a high volatility slot which may mean stretches of non-winning spins and a chance at large wins with an RTP of 96.20 percent which is close to the market average. The Annihilator slot machine has a top payout of 5,000 times your bet.

The Annihilator slot machine symbols begin with 10-A metallic royals designed in the band logo's font. The premiums continue the eerie theme, with a cracked mirror, a guitar, and Alice clutching her teddy bear. Alice is the most valuable of the regular symbols, worth 30 times the stake for a five-line bet. Jeff Waters appears as the Wild symbol and can replace any other pay symbol. If five Wilds line up, Wild Jeff pays out 40 times the stake.

Annihilator slot game includes an In Command feature. This is activated at random on any base game spin. When this feature is activated, any Jeff Waters Wild symbol on the reels will expand to take over the entire reel, giving you wild reels. Multiple wilds result in multiple wild reels.

If the Wild reels do not produce a winning combination or feature trigger, you will be given one free re-spin. The expanded wilds/wild reels will be locked in place while the other reels continue to spin. Re-spins will continue to be awarded until a winning outcome and/or feature trigger is awarded. This feature is available only in the base game.

When three Clare the doll bonus scatters appear on reels 2, 3, and 4 simultaneously in the base game, the Fun Palace feature is triggered. You enter the 'Fun Palace,' where you'll find the staircase and a slew of creepy dolls.

The Set the World on Fire feature can also be accessed by landing the devil scatter symbol on reels 1, 3, and 5 at the same time in the base game.

What is the maximum bet for Annihilator?

The maximum bet for Annihilator is 100.

What is the minimum bet for Annihilator?

The minimum bet for Annihilator is 0.10.

Can I play Annihilator on mobile?

Yes, you can play Annihilator on any Android or iOS device.

What is the RTP of Annihilator?

What is the biggest potential win for Annihilator?

The biggest potential win for Annihilator is 5,000x your stake.

The Annihilator game is available at Genting Casino. The site is a great collection of slots, table games, and live casino games. Visit Genting Casino online to enjoy any of these games wherever you are using any device. Annihilator is a dark themed game with plenty of images that remind you of the songs. If you are a fan of this music genre or a slot player looking for a slot machine that has high reward potential then this game is for you.