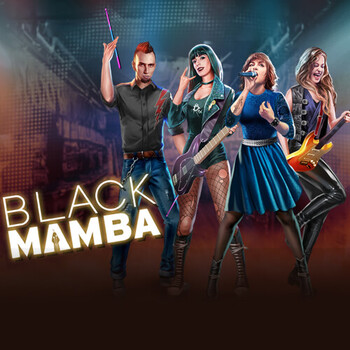 Produced by
Play N Go
Black Mamba online slot is a Play 'N Go slot with a 5 by 5 grid. It is based on the Italian rock band and is available across all platforms for 0.20 to 100 per spin. The Black Mamba slot machine has a lot of extra bonus features, cascading reels, and multiple ways to win on each spin. Black Mamba slot has an RTP (return to player) of 96.50% and a high level of volatility. The maximum possible win for Black Mamba is 5,000 times your stake.

The Black Mamba game is based on a band, who hail from Italy. Microphones, headphones, guitar picks, and drumsticks are among the low value symbols on a black and white background with stars and posters. Then there are the Black Mamba band members, including Alexandra, Cecilia, and Fred.

The band's logo, a snake, serves as the Wild symbol and, as is customary, replaces all other symbols. Martin doubles wins when he is a part of a winning combination and is the 2x wild. When three or more symbols appear in a row, either horizontally or vertically, you can build winning combinations. Martin (the 2x wild), which awards 2, 6, or 50 times your wager for combinations of 3, 4, or 5, doubles the standard wild, is the most lucrative symbol. The Black Mamba slot game comes with cascading reels, which means winning symbols are removed and new symbols fall from above to try and create more wins.

Additionally, the Black Mamba slot has solo features, which are randomly triggered features that could occur on a spin that doesn't pay out. The performance of a special ability varies depending on which band member is now engaged shown by the band member standing next to the reels:

What is the maximum bet for Black Mamba?

The maximum bet for Black Mamba is 100.

What is the minimum bet for Black Mamba?

The minimum bet for Black Mamba is 0.20.

Can I play Black Mamba on mobile?

Yes, you can play Black Mamba on any Android or iOS mobile device.

What is the RTP of Black Mamba?

What is the biggest potential win for  Black Mamba?

The biggest potential win for Black Mamba is 5,000 times your stake.

Black Mamba is available at Genting Casino. The site holds a wide selection of slots, table games, and live casino games. Visit Genting Casino online to enjoy these games at the comfort of your own home using any device. Black Mamba is a unique game. The band it is based on is not world renowned however, it is a highly enjoyable slot whether you are a fan or not. The possible rewards are good and the maximum possible win of 5,000x your stake can be great.