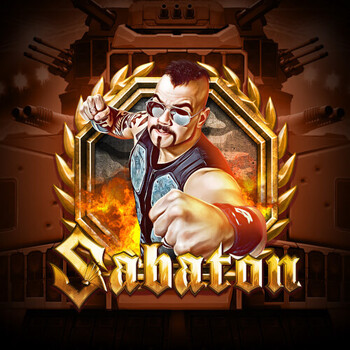 Produced by
Play N Go
Sabaton slot machine by Play’n Go is the first game to be named after the popular Swedish power metal band. The game is played across 5 reels and 10 pay-lines. Sabaton is a highly volatile game that consists of numerous random features and modifiers. It also features the Battalion Spins round that can land you a win of up to 5, 000x your bet.

Play’n Go picked the fiercest band of modern times to create their first branded slots game. The game’s design is about big cannons, armour, war tanks, rotating machines, and lots of explosives. The reels have a concert setting with spotlights in the background. The game’s soundtrack encourages any new or existing fans of the band to nod along with the musing as they play Sabaton.

Playing Sabaton slot online is quite interesting thanks to its numerous symbols and features. The game has diverse symbols including the lower-paying battle-themed symbols that include Roman battle helmets, WWII pilot hats, swords, and grenades. These are followed by the four band members, Par Sundstrom, Chris, Hannes, and Tommy. The game’s wild symbol is the highest paying symbol and substitutes for all regular symbols.

Sabaton slot has two features that have a great impact on your winning chances. When you start to play Sabaton slot, you will notice that one low-paying symbol, including the wild, is randomly selected to appear in Mega Stacks across all reels. The second instance of full-screen results from high-paying and wild symbols. This can result in a win of up to 1,000x your bet.

Sabaton slot machine has three special features that make things interesting. The Chained Reels is the first of these and is randomly triggered on any spin. When you spin the reels, two or three adjacent reels of the three middle reels are selected and will spin in sync to display matching symbols. This feature is not active during the free spins round.

The Land Stand feature—named after the band’s most famous track, is the other feature that is randomly triggered. Either one or two reels are randomly selected to become stack wilds. The feature is active during both the main game and free spins round. The Land Stand feature can be triggered along with Chained Reels for higher payouts during the Battalion Spins.

The Battalion Spins is the heart of the game. It is triggered by landing 9 scatters, either by regular scatters, a Mega Scatter (3x3), or a combination of both. When triggered, one symbol is randomly selected to become the Mystery Symbol and Metal Stacks during the bonus round. The feature awards 7 free spins and can be retriggered to give you an additional 7 free spins.

Sabaton online slot machine is an interesting slot that delivers a fun gaming experience. While 10 pay-lines might sound like a less exciting format, the game’s several bonus features work together to offer players thrills as they spin the reels. The Chained Reels and Mystery Symbol are regularly triggered awarding players some frequent impressive wins. Undoubtedly, Sabaton is a game that will interest all types of players.