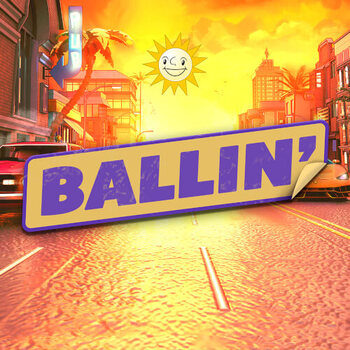 Produced by
Blue Print
Become a baller in Blueprint Gaming's Ballin' game. There are Multiplier Wilds up to 3x and Super Star Wilds, which grow upwards and provide Multiplier Wilds 3x values. There are 5 reels and 20 paylines available. These apply during the second round of bonus spins, but multiplier wilds remain sticky. Super Star Wilds rise skyward and grant you more 2x or 2x Wild Multipliers throughout the Super Star bonus spins feature. Win big and leave with a 96.01% RTP rate and peak rewards of 10,000 times your wager as you play Ballin.

The Ballin' online plays out on 5 reels and 20 fixed paylines in a 3x4x4x4x3 design. Essentially land 3, 4 or 5 indistinguishable symbols from left to right, starting from the main reel, across any payline will frame a triumphant mix.

Wager choices range from 0.20 to 50 for every spin. There is a Coins symbol in the base left-hand-corner of the screen (on the work area and versatile form) which raises generally accessible stakes on 1 screen.

With an abundance of subjects, the Ballin' online slot has a hip-bounce vibe as it heads to the roads of downtown Miami at dusk. 'Ballin' as per Wiktionary is characterised as "having a pompous, well off way of life". Not in light of the ball, it helps me a ton to remember the Monster Mode slot from Loosen up Gaming.

On the reels, you will see A, K, Q and J royals which utilise a Dollar Note textual style. Then, at that point, you have gold watches and gold rings. In conclusion, the 4 most noteworthy worth symbols are addressed by 4 feline baller characters which sport b-ball pullovers, pearl accessories, baseball covers and shades as well as gold chains. The Baller 4 image is the best paying with 3, 4 or 5 granting 2.5, 5 or 25 x your absolute wagered. This implies a screen brimming with this image will bring about a 500 x bet payout.

Different symbols are abundant. You have 2x and 3x Wilds which show up on the reels 2, 3 as well as 4 just (the 3 centre reels). They substitute for every single paying image. With Super Star Wilds arriving on the 3 centre reels, you have a Reward Scatter which shows up on reels 1 and 3 as well as a Major Balls Reward and Super Star Extra Scatters which land on reel 5.

Ballin slot machine has amazing features. At a given spin, a Star Wild icon can haphazardly show up on reels 2, 3, or 4. Whenever it shows up in view, it grows upward and changes over all positions it covers into 2x or 3x Wilds. On the off chance that the Star Wild image covers a situation with a 2x Wild image, its multiplier is expanded to the limit of 3x.

​​The Ballin' looks perfect and is an awesome game to play. Outwardly magnificent, and the energy is enthusiastic.

As far as the ongoing flow of the game, it rotates around Wild Multiplier symbols which can reach up to 3x. In the 2 bonus spins highlights, Wild Multipliers are tacky with a reel brimming with them compensating you with extra bonus spins. This game is most certainly worth the attempt. Play Ballin and win big.