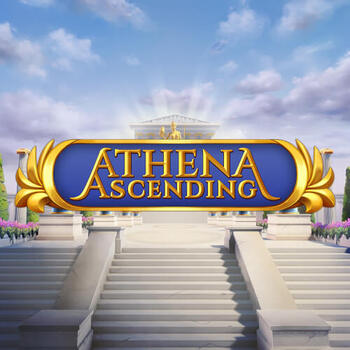 Produced by
Play N Go
Join the Greek goddess of battle as she ascends to Olympus in Play 'n GO's Athena Ascending game. Multiplier wilds up to 4x are available in this 5 reel, 20 payline game, and they can combine on the centre 3 reels to create a 64x multiplier. Wilds are sticky during the bonus spins feature, and their multiplier value rises up to 4x with each additional bonus spin. You'll play free re-spins after the allotted bonus spins have been used up until all wild symbols have vanished from the reels. offering 10,000 times the maximum bet wins and an RTP of 96.2 percent. Play Athena Ascending to know more.

Players may expect basic gameplay in the base game of Athena Ascending online slot, which is played on a standard grid of 5 reels and 3 rows. Additionally, there are 20 paylines available for winning combinations, which call for a minimum of three matching symbols. To receive a reward, the symbols must be arranged sequentially across a payline, beginning with the leftmost reel.

The Athena Ascending online offers a wide range of betting options, from 0.05 to 100 per spin. Both big rollers and gamers who prefer smaller sums may find these wagers ideal.

The centrepiece of the Athena Ascending slot machine are reels with golden trim that are resting on a marble plinth. They are framed by a background that features a pearly white palace (perhaps Olympus) and overcast clouds. Additionally, there is some vegetation surrounding the reels and a brazier on either side. Good graphics and an excellent animation style, together with complementary music, round out the game experience.

The return to players for Athena Ascending is 96.20 percent, which is higher than usual for Play N Go. Moreover, a model with a high level of volatility is combined with a maximum win potential of up to 10,000 times the stake. If they succeed, high volatility models might offer few but far more valuable rewards.

The low-paying group of symbols embellished with olive branches consists of marble 10-A royals. These are followed by more theme-related high-paying symbols, including Athena herself, a scroll, a vase, a helmet, and Pegasus. She is the most valued symbol and pays 50 times the wager for a payline that is completely covered.

The wild symbol, which can substitute for other winning symbols in winning combinations, is a gold coin. The game's scatter symbol, a white owl, can also be utilised to start the bonus spins extra round; however, more on that later.

Athena Ascending has few amazing features. You can find Wild symbols on reels 2, 3, and 4, while the premium symbols pay out between 2 and 50 times your wager for 5 of a kind winnings. The multipliers on the wilds range from x1 to x4, and they will increase any wins they contribute to. The win multipliers are compounded together for increases up to x64 if multiple wilds contribute to a single line win.

You only need three, four, or five of the owl scatter symbols in view to start the bonus round. In addition to receiving an upfront scatter payment for 1x, 20x, or 500x your stake, you also receive 5 bonus spins regardless of the number of scatters that trigger them. In the bonus round, wild symbols behave somewhat sticky since they are stuck in place until the multiplier hits x4.

Per bonus spin, the sticky wild multiplier rises by one, and the wild leaves the grid when it reaches a multiplier of four. The good news is that the bonus round will continue with re-spins until all wilds have dropped if sticky wilds are present on the fifth and final bonus spin. As scatters cannot land during the feature, this is the only option to receive additional spins.

The aesthetics and main gameplay mechanics of Athena Ascending are strikingly similar to its predecessor. This release offers up to x4 multiplier wilds instead of x3, and the multiplier rises rather than falls in the bonus round. However, you only receive a smaller number of bonus spins, and the maximum payout has been increased to 10,000 times your original wager. Play Athena Ascending and win.