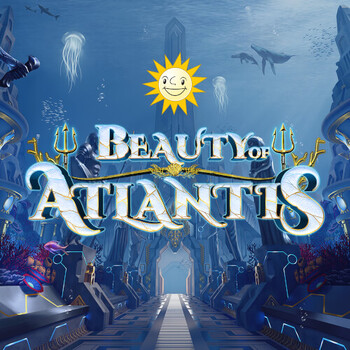 Produced by
Merkur
Plato circulated the legend of Atlantis. Half deity, half human, these people founded Atlantis. They established an ideal society and rose to prominence as a maritime force. Their house was made up of a series of revolving islands connected by deep moats that cut across the middle. The lush islands housed a wealth of unusual, exotic wildlife in addition to holding gold, silver, and other valuable metals. After a little delay, 10 fixed win lines on Beauty of Atlantis game 5 reels become revealed. The shells, the scatter symbols, which launch up to 40 free games when you find at least three of them, may be found in the centre of this scene between all the seahorses and dolphins. Play Beauty of Atlantis to know more about the game.

About Beauty of Atlantis

Atlantis's history was told by Plato. Half-god, half-human hybrids were Atlantis' founders. They developed a utopian civilization and rose to prominence as a maritime force. Their residence was made out of a series of overlapping islands connected by a central canal and spaced apart by broad moats. Gold, silver, and other precious metals could be found on the lush islands, which also hosted a variety of rare and exotic animals. 10 fixed win lines are immediately visible on Beauty of Atlantis' 5 reels. The shells, the scatter symbols, which launch up to 40 free games when you uncover at least three of them, may be hidden among all the seahorses and dolphins in the centre of this scene.

The game has an underwater backdrop with a futuristic design paralleled to the story of the myth Atlantis. You will interact with a number of symbols that are familiar and in theme. There are the traditional card suits, the girl warrior, the boy warrior, a dolphin, a seahorse, and the shell that can lead to bonus games.

The beauty of Atlantis has amazing mechanics. If a win takes place, the symbols that were used to win will turn to golden symbols for the following spin. There is more, the golden symbols will remain golden symbols until the bonus round ends making way for more wins to occur.

Beauty of Atlantis has a return to players rate of 96 percent and high volatility. This gives players ideas on how to approach the game.

Beauty of Atlantis online, a slot machine with a fantasy theme, immerses players in an underwater adventure based on Plato's allegory of the enigmatic island of Atlantis. The reels are set against a deep blue abyss with the submerged metropolis in the background, creating a serene and quiet atmosphere. The Shell Wild symbol emphasises the fantasy theme, and when you win a golden symbol, the reels will expand. The boy and girl warriors, seahorse, dolphin, and traditional card suits are the top paying symbols.

Beauty of Atlantis online slot features a significant volatility and a maximum win of 880,400.

Getting three shells will award you 15 bonus spins for the bonus games. In Beauty of Atlantis, you can earn a 25 bonus if you can successfully land 4 shells. And it does not stop there for it can give you up to 40 bonus spins when you land 5 shells. The golden symbols acquired from the base game will remain golden until the bonus round ends.

Beauty of Atlantis at Genting Casino

Beauty of Atlantis slot machine is an awesome game. Players will be immediately immersed in a very tranquil and relaxing ambiance after the game has loaded, which is a nice departure from the typically boisterous and high-energy slots. The visuals are crisp and the soundtrack is not boring. The game also has an amazing base game. The symbols are generous enough to sustain you till the bonus round. SInce it has expanding reels, wins are achievable even though this game has high volatility. The symbols that participated in a win grants you golden symbols that can be used until bonus spins. It is also good to note that the golden symbols will last only until the bonus round. Overall, this game is worth the try. Play Beauty of Atlantis and win big.