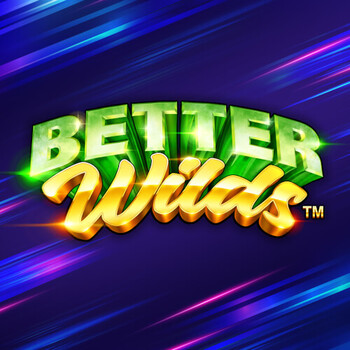 Enjoy traditional old school gaming in Better Wilds, where straightforward gameplay  combines excellently with modern features.  Living up to its name, the game’s special wild symbol does some heavy lifting  here - from triggering respins, to shifting reels and expanding up or down, producing plenty of opportunities to win. The bet range is wide, starting from 0.50 to a maximum of 2,500 per spin, appealing to both casual players and high rollers.

Set on a 5x4 grid and 20 paylines, winning combinations are formed from left to right starting from the leftmost reel. The deep blue reels display A to J royals, sparkling cherries, single, double and treble bars and a bell. The Lucky 7 symbol has the highest worth awarding 20x the stake per payline. There are two wilds in the game namely the standard gold wild symbol and the green gemstone special wild. The gold wild can replace all other symbols and award up to 20x the stake for landing 5 on a payline.

The green gemstone is the dynamic Special Wild symbol and lands only on reels 3, 4 and 5. While it triggers free respins, it also acts as an expanding wild that stays on the reels during the respin, shifting 1 reel to the left. It also increases in height by 1 row. The process is repeated with the Special Wild moving 1 reel to the left and expanding by 1 row each time until it drops off the screen. Wilds move across the reels and make room for more wilds to appear making it easier to form winning combinations with higher payouts. It’s possible to land multiple Special Wilds on the same standard spin or on a respin. The free respins feature continues as long as wilds are present on the reels.

If you’re a fan of classic fruit machines with a twist, check our Better Wilds at Genting Casino, available to play on all devices..  Remember to set your budget for the session and never stake more than you can comfortably afford to lose.