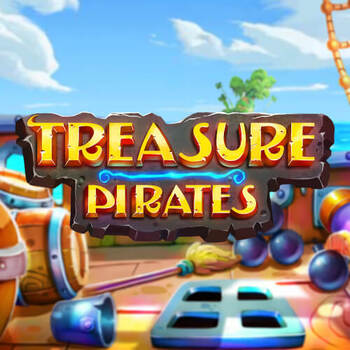 It’s time to jump aboard and set sail in the seven seas with the new Treasure Pirates slot. The soundtrack is dominated by the sounds of birds chirping, bells ringing, and waves breaking on the boat, which may be a relief to those who quickly tire of cheery sea shanties.

Shipmates can expect a solid 5x3 layout and 243 ways to win when they climb aboard. Racking up winning spins requires players to land 3+ symbol combinations for payouts that range between 0.25x and 2.5x your stake - not breathtaking, but the bigger treasures can be found in the bonus features. Treasure Pirate features include Collect, Side strike, and Roaming Sea. In “Collect feature” the Coin symbol has a total of twelve possible values, the final of which is 888x, while the other eleven values range from 1x to 25x the stake. Additionally, when the Coin and Collect sign land simultaneously, the Collect feature is activated. When it occurs, all the prizes are gathered and given to the players. A side bet called a "Side strike" entails betting on a red or green chip, with the former appearing on reel 1 and the latter on reel 5.If two chips emerge on both sides (1x the bet), and one or two additional chips of the same color, you can win money (2x and 5x the bet). Choose your wager and its size; standard winning combinations will not impact the Side Strike. While in “Roaming Sea”, when a Scatter lands on the grid, it starts roaming due to the feature that selects a new position on the board and frames it. Only the Wild, the Parrot, and the Coin symbols can land inside it, with the same icon appearing on each spin. The range of bet sizes is 0.05 to 30.

Set your budget and sign up for Treasure Pirate at Genting Casino, which is accessible from any mobile device. To win prizes, just be careful not to play more than is actually necessary.