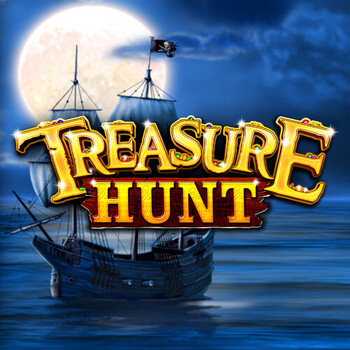 Produced by
IGT
Pirates and treasures have always been a favourite theme in the slot industry. And IGT's Treasure Hunt slot online is full of the theme. The game's 5 by 3 vibrant grid contrasts against a night time view of the horizon from a deserted island complete with a treasure chest and a signature coconut tree. The background is animated, with a pirate ship sailing across your screen while you spin. Treasure Hunt's reels are full of elements from pirate stories such as a compass, a skull and crossed swords flag and the like. The overall visuals for the game may look a bit dated but doesn't take away from the goal of spinning and winning.

The Treasure Hunt slot game is a 5-reel, 3-row casino game with 30 paylines. The goal is to match symbols starting from the leftmost reel and working your way to the right. The starting bet for the game is 0.30, but seasoned slot veterans can play sky high stakes at 3,000 per spin. The RTP is right at the industry standard of 96%, but the top win for the Treasure Hunt slot machine is 1000x your bet. So if you'd like to take home the jackpot prize, it would be best to take advantage of the high bet ceiling. It’s like finding the hidden pirate treasure if you hit the top prize at max bet.

The low paying symbols for Treasure Hunt are the common playing card numbers in different colours. Next are symbols that are all associated with the Pirate theme. These are pirate flags, compasses, bells, treasure maps and rings which can pay up to 300 times the stake for 5 of a kind in a winning line.

The special symbols to look out for are the Skull Wilds, Pirate Ship Scatters and the Treasure Chest Scatters. The Skull Wilds pays the jackpot of 1,000x your stake when 5 are present in a win. Apart from that, they substitute for all other symbols aside from the scatters. The Pirate Boat Scatter triggers the Surrounding Wilds Feature while the Treasure Chest Scatter triggers the Free Spins Feature.

A Pirate Boat scatter anywhere on the reels will trigger the Surrounding Wilds Feature. The Pirate Ship with the moon in the back will be the focus and if a win can be formed, it will transform the surrounding symbols into wilds.

On the other hand, 3, 4or 5 Treasure Chest Scatters on the reels will activate the Free Spins Feature where an initial 10, 20 or 100 free spins respectively. Free spins can be retriggered with the same conditions and awards up to a maximum of 600. The reels also give more higher paying symbols during this bonus.

Overall, the Treasure Hunt Game is a decent slot game that players of different levels can enjoy given the bet range of 0.3 to 3000. The max bet may be a bit of a stretch but there are players out there who get thrilled with that high of a stake. Multiply that to the 1000x highest win and you are in for a treat should you be lucky enough. You can say you really found the hidden treasure. The game's visuals can look a bit lacking for some but the gameplay and features totally make up for it. Come and play Treasure Hunt, together with thousands of other online casino games, in Genting Casino.