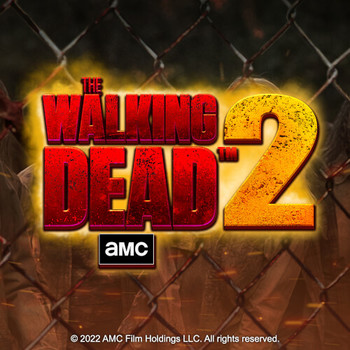 About The Walking Dead 2

Since Playtech Origins is a subsidiary of the well-known Playtech corporation, you can trust that they will produce top-notch releases. And yet, with a game based on something as well-known as The Walking Dead, it would be pretty simple to miss the target or overreach. Thankfully, the designers did a terrific job of keeping their goals in check; the end result is just as thrilling as we had hoped. But the gaming surface is conventional, with 5 reels, 3 rows, and 25 paylines.

The zombie suburbia backdrop is directly from the show, the higher earning symbols are all important characters, and the other bonus symbols are closely connected to the story of The Walking Dead. There is more than enough zombie animation on the reels to keep players riveted, and fans will notice the eerie soundscape that plays during your spins.

The maximum single win in The Walking Dead 2 slot online is 5,000 times your wager, and the game's mathematical engine gives a medium amount of volatility. While the betting range accommodates players with a variety of bankrolls, that is a respectable prize. The minimum stake that you must always place is 0.05, and the maximum bet for each spin of the game is 500. Suppositionally, The Walking Dead 2 offers a 95.84 percent return to players, which is somewhat below average.

The female and male figures with greater values are depicted in green, blue, orange, dark blue, and yellow on the paytable, which also includes low-value patterns from the 10-A deck of cards. Among the unusual patterns, hands painted with the appropriate wording stand in for single wilds, while zombies symbolise stacked wilds. Cars with red scatter lettering are used as the scatter symbols. On five reels, the main payline and the wild line are each worth 20 times the wager.

The Walking Dead 2 online slot has amazing features that can enhance your winnings. After each win in the base game, the split reel feature is triggered, which moves all the reels (reels 1-3) one place to the right. In order to determine any fresh victories, the empty reel then respins. Up until there are no more wins created, every win initiates another respin.

When three or more van scatters appear on the reels, the free spin bonus game begins. Then, five zombie heads will be hanging from a tree, and this is where you can select one of the features from the list below to use in the free spins game. By obtaining at least two additional scatter symbols throughout the free spin modes, it is also possible to retrigger the bonus spins.

The coin bonus game may only be accessed by landing four or more vehicle scatters on the reels. The 5x5 bonus screen with free spins full of coins, blanks, and a stacked wild walker in the middle reel cutting the grid in two is accessed after selecting a multiplier award. You use the following features while playing through your free spins.

The Walking Dead 2 at Genting Casino