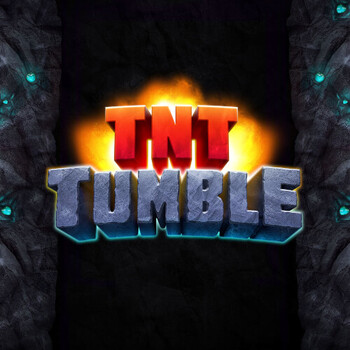 The TNT Tumble slot is a mining-themed slot that has a marvelous bonus round. The game has a 5x7 reel setup with a cluster pay system. It has a medium to high volatility and a Return to Player rate of 96.11%

The minimum bet is 0.10 up to a maximum of 100. Symbols include Silver Nugget, Gold Nugget, Bum Gem, Green Gem, Orange Gem and Red Gem. The latter, which offers 15x your stake for a combination of seven, is the most profitable. A winning combination must consist of at least three identical symbols connected either horizontally or vertically. Lookout for the wild Drill symbol, as it will help you burrow down into stone tiles. Drills can stack, and a seven can be worth 50x your total bet. Wilds are only eliminated once they have reached the bottom of the grid. The base game has the occasional moment but things can get frantic during the Bonus game which comes into action when all 3 rows of stone blocks are blasted away on one spin. The bonus game comes with 6 free spins initially, and there are three options for players to pick from: the Extra Spins, Multipliers and Extra Spins or Multipliers. On the grid, there are unusual stone blocks that contain multipliers and additional spins. The multiplier block increases the bonus game's progressive multiplier by x1, x2, or x3 when it is demolished, while the additional spins block grants 1-10 free spins. Continue blasting those stone blocks because clearing three rows wins an additional two free spins and stones eliminated are not reset between spins. Watch out for the Dynamite stone block symbol that explodes in both the bonus and regular games. All the other stone blocks in their row are destroyed when this one is removed by an explosion. Also, the game has a Bonus Buy feature that you can use for a cost of 70x your stake.

Try TNT Tumble on Genting Casino available on all mobile devices. Remember to set your gaming budget accordingly and take a few brakes in between.