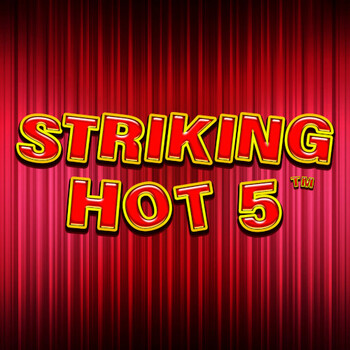 Produced by
Pragmatic
The only thing you'll be looking for in the new Pragmatic Play casino game Striking Hot 5 slot are some fruity connections. The game features a traditional fruit theme, and the best-paying symbol is the even more traditional number 7. Given that it has already produced well-liked games like Juicy Fruits and Fruit Party, Pragmatic is by no means a stranger to fruit-themed slots. Make connections to increase your chances of winning large in this game, which has no unique characteristics. The return to players percentage for Striking Hot 5 game is 95.34 percent. Play Striking Hot 5 for 0.05 per spin.

The Pragmatic Play classic Striking Hot 5 slot game has 5 reels and 3 rows. This game includes five lines and a minimal minimum bet of 0.05, making it perfect for individuals who want to gamble but don't want to take any big risks. The wildest High rollers won't be let down either because the maximum bet is 100. Casino operators have the option to offer Striking Hot 5 cheaper RTPs of 95.34 percent and 94.32 percent in addition to the default RTP of 96.29 percent.

The maximum win on the Striking Hot 5 slot online is 5000x. In a game without any additional features, that is rather thrilling because it suggests that it is possible on every single spin. Due to its high volatility, it will often pay out less frequently, but there are more opportunities to score significant winners.

The game has a fruity motif, and the background music is red drapes swaying. Even if it's funky dance music gets a little old after a while, it's great for some Friday night slots. Despite having an outdated theme, Pragmatic did a fantastic job of updating this slot by designing sharp, contemporary symbols. A winning combination is formed by linking 3 symbols (or just 2 watermelons), and the connection must occur along one of the game's 5 lines. For use on PCs, tablets, and mobile devices, Striking Hot 5 has been optimised.

There aren't any features that will enable you to score big. The symbols themselves, though, are lucrative enough to make up for that. Watermelons, lemons, cherries, and blueberries are among the least valuable emblems. Even though these are the "worst" symbols, a whole line with one of them pays a respectable 44 times your wager. Orange and apple are the next items. You receive 104 times your wager if you make a full-line connection with one of them. The 7, just like any classic slots,  is the highest paying symbol.

Since Striking Hot 5 online slot is a classic game, players can expect a classic approach. The game does not have any features like free spins and other bonus rounds. Nevertheless, the game can still entertain players with some wins and decent payouts

In the Striking Hot slot machine, there are seven pay symbols, and the symbol payouts are actually quite large. Melons (which pay even in sets of 2), lemons, cherries, and grapes are examples of low-paying symbols. You can earn up to 44 times your wager for a set of five, and the payouts increase as you advance up the paytable. While you can win up to 104 times your wager on oranges and apples, sevens are the most valuable and pay 1,000 times your wager for a combination of five.

In Striking Hot 5, there is only one gameplay element, and it isn't really a feature in the traditional sense. There are no Wilds, simply Dollar Scatters that can multiply your winnings by up to 50x when they appear in any position.

Striking Hot 5 might not be the right slot for you if you're seeking for one with lots of features and bonuses. But if you want a traditional, simple-to-play fruit machine with tons of possibilities, this is the game for you. It's not that thrilling, and you feel like you've played this game before. Striking Hot 5 is by no means a horrible game, on the other hand. Despite lacking features, it nevertheless manages to be fairly interesting. It's exciting to know that getting five 7s in a row pays out 1000 times your wager. Play Striking Hot 5 slot and win.