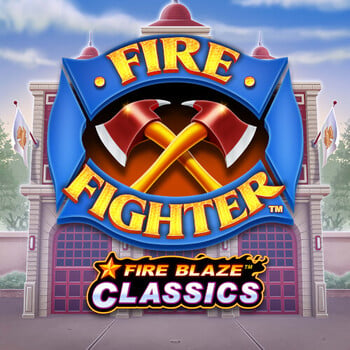 This is not a drill! Make your way to the fire station and get ready for that rush of adrenaline with Fire Blaze: Fire Fighter. Set in the world of fire-fighting, it comes with a 2000x jackpot and medium-high volatility. With a combination of 5 reels, 4 rows, and 40 paylines, this game also offers a great set of pay symbols. Five low-paying ones are represented by playing cards (Tens to Aces) which can pay up to 1.2x your bet for a full combination. The high-paying ones feature more exclusive symbols: fire extinguishers, helmets, fire trucks , and dogs. The dogs top them all and are worth 5x your bet for 5 symbols in a combination.

It also has special symbols such as Fire Fighter - which can substitute for any of the pay symbols in winning combinations, and Fire Bell symbols and Scatters which are part of their bonus features. Free Spins is triggered by landing 3 or more Scatters in a single spin. This feature starts with 6 free spins and with each one, flames will appear over the symbols. These flames can be transformed into either Wilds or Fire Bell symbols.

The game has a theoretical Return to Player rate of 95.92% and it has a wide betting range that can cater to anyone. Fire Blaze: Fire Fighter is playable on Genting Casino, available on all mobile devices. Winning isn't everything, remember to step back once in a while and mind your budget at all times.