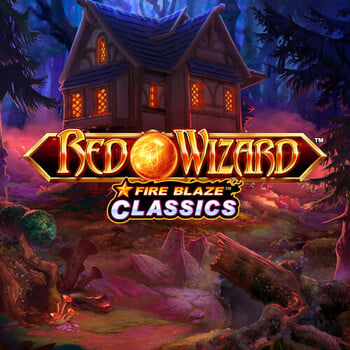 The Red Wizard slot's action takes place on a machine that is a little out of the ordinary. The game is set up in a 3x4x4x4x3 configuration of the 5 reel setup with 50 paylines. It has a medium variance and Return to Player rate of 96.49%.

Player’s bet sizes range from 20 up to 500 per spin. A Potion Bottle, Gold Ring, Book of Spells, Raven, and the royals A through 10 in gold can be found on the reels. The highest paying symbol, the Raven, which pays 3x your bet when five appear on a payline. The game's wild is the Red Wizard. He can appear anyplace other than on reel 1 and, when a part of a winning combination, can take the place of all other regular symbols. When you get seven or more Flaming Ball bonus symbols in a row on the same spin, the Fire Blaze Respin feature is activated. After that, you'll get three respins on a new set of reels with Blanks, Stars, and Flaming Ball symbols. If a new Flaming Ball latches into place and the respins are reset to three. The values associated with the Flaming Balls are combined to give you an overall prize when all of your free spins have been played. During this round, if you land a Star symbol, it changes into a jackpot prize and is added to your overall award. You must place Flaming Balls or Stars in the spots on the game grid in order to win the Grand Jackpot. If you get 3, 4, or 5 castle scatter symbols anywhere on the reels in one spin, you'll win 1x, 10x, or 50x your wager and trigger the Free Games. This will award 6 free spins and the payout is boosted by 2x, 4x, 8x or 16x multipliers. Lastly, free spins can be triggered in the Fire Blaze Repins round.

Try Fire Blaze Red Wizard on Genting Casino, available on all mobile devices. Remember to set your gaming budget accordingly and take a few brakes in between.