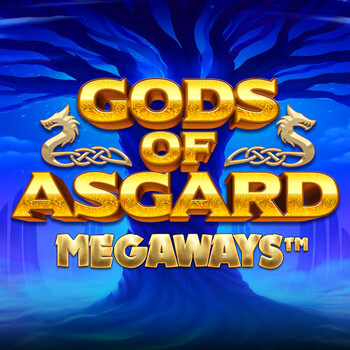 Produced by
IronDog
You play Gods of Asgard Megaways on a game grid with 6 reels with 2–7 symbols on each, plus a top tracking reel with 4 symbols. Every time a spin is made, the symbol arrangement is different, creating 324 to 200,704 possible winning combinations. It is playable between 0.10 to 10 which is great for penny slot fans. The maximum possible win is 50,000x your stake which is high even for a Megaways game. The RTP for Gods of Asgard Megaways online slot is 96.7% which is above the market average. Volatility is high.

About Gods of Asgard Megaways

The Gods of Asgard Megaways slot machine have excellent animations and a tonne of features that keep the game interesting and engaging. You can just make out the tree of life in the centre that branches out above the reels against a background of clouds and mystery. The Gods of Asgard Megaways game gods can change the symbols on the central reels, match them with those on reel 1, forge them into lucrative rings, and change the symbols on reels 2 into multiplier Wilds.

The 10-A card ranks, which are presented in a rock/Norse font and pay 0.6x to 1x the stake for a six-of-a-kind win, are listed first in the paytable. When landing a winning way of six horns, mugs, necklaces, hammers, or rings, this increases to 2 to 15 times the stake. A wolf Wild symbol can show up on reels 2, 3, or 4, and a raven Wild multiplier can show up on reels 2 and 3. Both Wilds can be used in place of any regular pay symbol.

In both the base game and the bonus round, God symbols can be found on the upper reel. They can either land on the first spin or come from a cascade and work as follows:

After their modifier has activated, god symbols are removed from the reels. Multiple modifiers can be activated at once.

In the base game, landing 3, 4, 5, or 6 scatter symbols grants 8, 10, 15, or 20 free spins, respectively. Landing 3-6 scatters during a free spins round awards an additional 4–12 spins. The bonus round of Gods of Asgard Megaways slot game has a progressive win multiplier that starts at 1x.

You can play Gods of Asgard Megways slot at Genting Casino. The site offers a wide selection of slots, table games, and live casino games. Visit Genting Casino online whenever you feel like getting a few games in using any device to enjoy these games. Gods of Asgard Megaways is a game with great graphics and excellent rewards. The Megaways system guarantees that there are plenty of possibilities and the game design has plenty of features that can help you win.