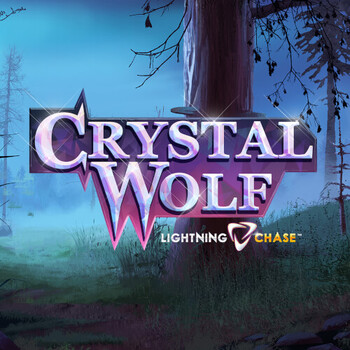 Produced by
Reel Play
Crystal Wolf Lightning Chase game has 6 reels, 3 rows, and 729 ways to win. For a win, line up three to six matching symbols on the following reels, starting from the leftmost. From 0.25 to 31.25 credits can be used to activate the Crystal Wolf per spin. This game has a 95.70 percent RTP and a medium-high volatility rating. The game is situated in a nocturnal wooded environment with crystallised symbols and creepy and wonderful chord sounds. The music gets faster as the game goes along, and during the Lightning Chase slot game feature, fireworks and lightning both flicker and pop.

There are 729 chances to win on the 6 reel, 3 row Crystal Wolf Lightning Chase slot machine. Despite initially appearing difficult, the game is simple to play. For a win, line up three to six matching symbols on the following reels, starting from the leftmost. From 0.25 to 31.25 credits can be used to activate the Crystal Wolf per spin. This game has a 95.70 percent RTP and a medium-high volatility rating.

The game is set in a nighttime woodland scene with crystallised symbols and eerie and magical chord tones. The melody indicates how fast as the game goes along, and during the Lightning Chase feature, fireworks and lightning both flash and burst.

Starting at the bottom of the pay table are the colored card suites of blue diamonds, green spades, red hearts, and purple clubs. Five of a kind combinations of these symbols pay either 1x or 2x your stake. Following are a pine tree, raccoon, stag, owl, and eagle. If five of the same symbols appear anywhere on the reels, you'll be paid 4x to 8x your wager.

The wild symbol, represented by the crystal wolf, can be used in place of any other symbol with the exception of the coin, collect, and golden collect symbols. During the main game and bonus round, coins with monetary values can be found. When you play Crystal Wolf Lightning Chase slot, you collect symbols that are self-titled upon landing and may emerge in gold to multiply cash collections as players are guided to the special features.

Crystal Wolf Lightning Chase online slot has few but engaging features that will keep you entertained while winning. Side Strike is an extra bet option that can be found on several Boomerang Studios games that allows players to place a side bet with each spin. When Side Strike is turned on, unique casino chips with red chips on reel one and green chips on reel five overlay pay symbols on the reels. Place a Side Strike bet and select red or green to win 1x, 2x, or 5x the amount you staked on the side bet.

Now for the main event, which involves spinning the reels and matching symbols that are located on neighbouring reels from left to right to win. Additionally, the game's action is centred on coin and collect symbols, which can award cash prizes or start the Hold & Respin bonus, which gives the game additional value.

Coin symbols provide cash payouts of 1, 2, 3, 4, 5, 7, 8, 9, 10, 20, 25, or 888 times your bet when they occur. Win the matching amount of money from all the coins shown by simultaneously landing a collect symbol. The Hold & Respin Feature, which begins with a count of three respins and by locking the triggering coins in position for the approaching bonus, is activated by landing six or more coin symbols on a single spin. Reels can now only include blank spaces, coins, or collect symbols. Landing a coin or collect symbol on a respin causes the respin count to be reset to three.

Also, Crystal Wolf Lightning Chase slot online adds a golden collect sign that gives the series a fresh spin. To win the total of all cash rewards multiplied by x2 in the regular game and x5 during the hold and respin feature, you must land a golden collect along with coins.

Boomerang Studios' Crystal Wolf Lightning Chase is an uncomplicated addition to their hold and respin bonus game series and a straightforward introduction to the golden collect symbol. It's worthwhile to give it a try. Doubling coin cash awards in the base game and increasing them by x5 during the bonus. The crystal wolf can show up stacked on the reels to help with regular winnings and increase the significance of his appearance in the game for bigger wins. Play Crystal Wolf Lightning Chase and win.