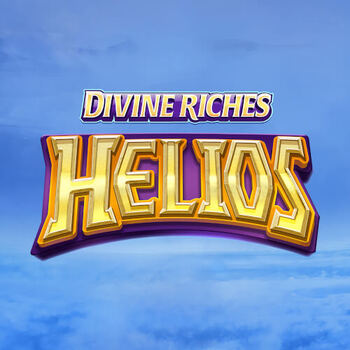 The Divine Riches Helios slot game is based on the ancient Greek god of the sun and personification of the sun, and it has an ancient Greek mythology theme (Helios). It's bright and colourful, set in the heavens, and has an animation feel to it. To the left of the reels, you'll notice Helios, a powerful young man with impressive arms. The music is upbeat and more enjoyable than the visuals.

The paytable begins with the lowest paying card suits, diamonds, clubs, hearts, and spades. For a full payline of five matching symbols, these are worth 2.5x to 3x the stake. Olives, pots, musical instruments, horse statues, and Helios symbols are among the highest paying symbols in the game. For a full payout, these have values ranging from 4.5x to 10x the stake.

Helios symbols, pay in both directions, from left to right and right to left. There's also a wild symbol that can take the place of any other symbol except the free spins scatter. The Blazing Bonus feature can be triggered by bonus token symbols as well.

The Divine Riches Helios free spins and the Blazing Bonus are two game-enhancing features. The Blazing Bonus feature can be triggered every time special bonus tokens appear in the game. Players click items to reveal one of four symbols: Divine, Mega, Major, or Big. The corresponding cash prize is won when 3 of the same symbol type are revealed. You will receive 8, 12, or 16 free spins if three, four, or five scatter symbols appear anywhere on the reels. During free spins, Helios symbols are collected.