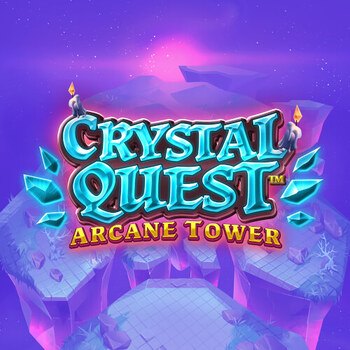 Thunderkick’s second installment to the Crystal Quest series stars Gemma again, the  fearless explorer, who is out to find fortune. This video slot comes alive on screen with bold and slick animations, lighting up win lines when they are formed, and crunching sound effects when symbols drop into place.  Avalanches plus multipliers that appear at all times, backed by Linked Reels, free spins, and a Wild Explosion feature make this a highly fun and playable game. Bets are from 0.10 to 100 per spin.

Set on a 6x4 grid using 4,096 ways to win, winning combinations are formed when three or more matching symbols land left to right from the first reel. Coming from the rear are the lower paying gems namely pink, orange, yellow, green and blue. The red, green, and blue crystals make up the mid pays, followed by the knight. The sorcerer is the highest paying symbol awarding 20x the bet for five. All symbols included in the pay-way wins are removed by the Avalanche feature and replaced by new ones dropping from above. Avalanches continue as long as new wins appear in the same spin sequence. A win multiplier is always active during this round, increasing one level each time the feature is triggered. When up to 6 adjacent reels synchronize on an initial spin, each Linked Reel becomes an identical copy of the other. This feature is random and does not appear in the middle of an Avalanche sequence. Twelve free spins are awarded when three treasure chest scatter symbols appear at once. Any two in view award 3 free spins while any two or more scatters awards 2 spins each, with no limit. The Wild Explosion feature comes into play during free spins. When there are no winning combinations, all wild symbols on the reels explode, removing the pay symbols in a vertical and horizontal line, potentially forming new winning combinations to trigger the Avalanche feature again.

Register to Crystal Quest: Arcane Tower on Genting Casino, playable on all mobile devices. Only gamble money you can afford to lose.