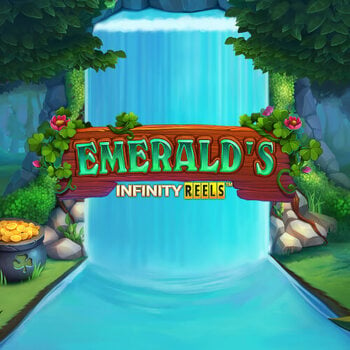 Played on a 3 reel 4 row set up. With the lowest playing symbol being an “Emerald” symbol, followed by a “Yellow Gem” symbol, a “Red Gem” symbol, a “Pipe” symbol, a “Mug” symbol, and finally the highest playing symbol a “Leprechaun” symbol. The other two symbols are the “2X” symbol and the “Bonus” symbol. When there are 3 matching symbols across all three reels, this triggers the lucky respin feature. The lucky respin feature allows all reels to move one position to the left, then the symbols that have matched are collected and the rightmost reel re-spins. The “2X” symbol and the “Bonus” symbol are present during the lucky respin feature. Collecting these doubles the number of symbols that are being collected up until that moment. This will continue until there are no further matching symbols, a 2x symbol or a bonus symbol lands, hence the Infinite Reels!

One of the other features in the game is the Free spins feature. When there are three or more “Bonus” symbols that are collected, twelve free spins are then awarded, there will be an additional two more spins awarded for every succeeding “Bonus” symbol collected. The collected symbols are stored until the end of the Free spin feature, this allows the same symbol to be collected multiple times within the same round. This makes it easier to achieve bigger wins! A special “2X” symbol is seen during the free spins feature, this will double the number of all types of collected symbols until that moment. The free spin feature can be re-triggered during the re-spin sequence by collecting three or more “Bonus” symbols. Bet ranges from 0.20 to 50.00.

Play Emerald’s Infinity Reels on Genting Casino available on any mobile device. Leprechauns do not always bring you wins. Don’t allow them to take all your money! So remember to set a budget and take time for a breather!