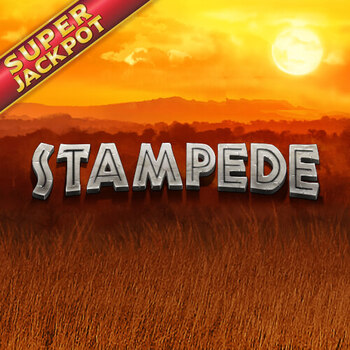 Produced by
Eyecon
Jump on the ride and take a trip down the African Savannah with the Stampede slot developed by Betsoft. Stampede, in this case, refers to what usually happens when a huge herd of wild animals are running in a pack. The slot incorporates different features, including a cinematic design that makes it attractive to players. Inspiration for this slot clearly comes from wild African animals.

Take a Trip Down the African Savannah in the Stampede Slot

Play Stampede slot on a five-reel and four-row grid with a staggering 1024 winning lines. These lines are both formed from left to right and right to left. This creates different winning chances in this exciting safari. RTP stands at 95.26%, which is slightly below the average with a medium variance. Small winnings can be expected along the way as you spin.

Stampede slot online is playable from a minimum of 0.02 coins and a maximum of 1 coin. After using 200 coins, the wager value rises up to 200 coins. The maximum possible payout from a single spin stands at 300x your initial bet. However, along the way, you can trigger multipliers of up to 27x from the available bonus features such as wilds and free spins.

Play Stampede slot on an African wildlife theme filled with animals as the symbols. Some animals include elephants, eagles, leopards, giraffes, zebras and antelopes. Also, five-card symbols have been used along with savannah trees. These symbols consist of low- and high-value rewards and can appear anytime on the reels, causing a stampede or wins. The standard cards are low-paying symbols in the slot.

Wilds appear on reels two, three and four during the base game and also while on a free spin. Wilds replace all other symbols to create a winning line on the reels. However, during free spins, any wild landing on the reels converts into a multiplier. A combination of wilds increases the multipliers by multiplying all three. The best combination possible is 3×3×3.

The Double Up feature is for players who are not satisfied with a winning round. It allows the player to test their luck by staking all or half of their winnings for the round. After staking, they then guess whether a coin lands on its head or tail. This can be done more than once for each winning round. Click the Collect button once finished.

The free spin round is activated by landing three, four or five scatter symbols anywhere on the reels. Free spins awarded depend on the number of scatters. Three, four and five symbols award eight, 12 and 20 free spins respectively. During the free spin round, all wild symbols act as multipliers for every win. It can be 2x or 3x, but the max value goes up to 27.

Betsoft has done a good job in creating the Stampede online slot. The slot features five reels along with 1024 paylines. The RTP for the slot stands at 95.26%, which is slightly below the average. The beautiful graphics and interface match the strong gameplay elements. Bonus features such as double-up and wilds increase the player's chances of winning. Stampede is definitely a must-try for online slot gamers.