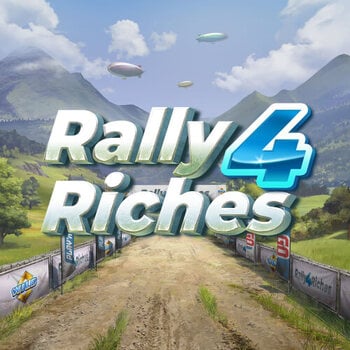 Race your way to some awesome rewards. Rally 4 Riches starts on a 3x3 grid with 5 paylines. Stake ranges from 0.10 up to 100. It has a superior Return to Player Rating of 96.25%. Fruits are used for the low pays such as classic lemons, watermelons, cherries, and grapes. Four automobiles make up the high pays, in various colors, from various eras.The blue one that looks like a Subaru Impreza WRX is the most valuable at 25x the stake, down to 0.5x for the cherries on the lower end of the table. The final symbol to check out here is the 1x3 wild which substitute for any pay symbol.

When a multiplier lands at the same time as a win, the value is multiplied by x2, x3, x4, x5, or x10. If no winning combinations land in conjunction with a multiplier, the Main Reel Respin feature may be triggered at random. When it is, the bonus reel is held in place while the other 3 reels respin.

Any nudge wilds that land trigger the Nudge Wild feature. Here, any wilds partially visible are nudged to cover a reel. There is a chance of also getting a Bonus Reel Respin which guarantees a multiplier on the bonus reel.

Land the bonus symbol to kick off the Championship Race Bonus. The game shifts to a race board with 25 spaces offering various rewards. Players move up to 6 spaces per turn and can land on a multiplier which pays out a cash prize, or a nitro boost moving them further along the board. At the end of the race, the player’s position results in different prizes.

The Jackpot Podium game consists of a five-tiered pyramid with a light that moves between spaces before landing on one. If the space reveals a bet multiplier, a prize ranging from x7 - x1,000 is awarded.

Register to Rally 4 Riches on Genting Casino to play. Available on all devices.Maintaining a good balance in playing and resting is key. Always set your limits.