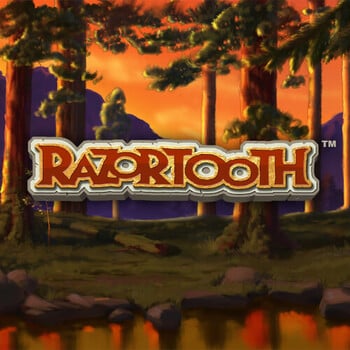 The game will take you back to a time when wooly mammoths, fearsome bears and saber tooth tigers roamed the wilds in Razortooth. Razor Toothwill start on a 5 reel slot with 243 ways to win. You can start placing your bets from a minimum of 0.25 up to a maximum of 100 per spin. It has a decent Return to Player Rate of around 96.6%. on the reels you'll see set of gems for the low paying symbols and animals for the higher paying symbols. The symbols will include blue, green, yellow and purple gems. Followed by  a bear, a bird with mohawks, a rhino and an elephant. The highest paying symbol is the saber tooth tiger.

Where Razortooth really starts to roar is in the feature round – 3 scatters will trigger the bonus where you’ll be awarded an initial 5 free spins. That sounds a little skinny but those free games will be boosted by the appearance of a stacked wild on up to 2 of the reels. Get the wilds on two reels and the payouts can quickly start to fly.

The Savage Wild is present during Savage Wild Free Spins and is a 1 x 3 stacked wild symbol. It substitutes for all symbols except the Bonus Scatter symbol.

Register to Razor Tooth on Genting Casino, which is accessible on any mobile device. Remember to set your gaming budget accordingly and take a few brakes in between.