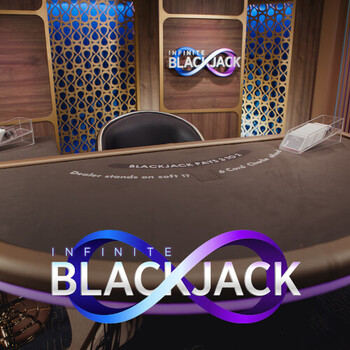 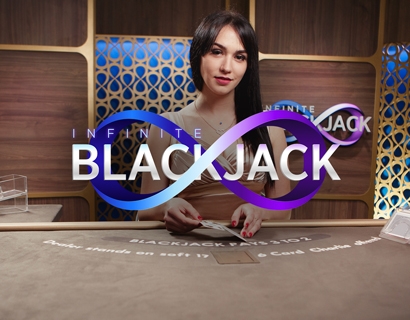 Features of the Infinite Blackjack

Evolution Gaming has designed Infinite Blackjack as an instant play game, so it can be played on both mobile devices and desktop computers without installing any app. The game is hosted in a dedicated studio of the developer and it has a high audio quality that allows players to hear the dealer clearly. You can play Infinite Blackjack at our recommended online casinos. Infinite Blackjack online game has several camera angles that cover the entire blackjack table as well as the dealer. A customization option has also been included which allows players to switch between different camera views and adjust the sound volume to their preference. However, unlike a few other live blackjack games from the provider, there is no Favorites Bets feature included.

The game has a flexible betting limit, and betting starts from 1 up to 5000 per round. It is called Infinite Blackjack because there is no limit to the number of players allowed to play the game in a round, although there is a betting window. When you play Infinite Blackjack online, you can use the live chat feature included in it to chat with the dealer.

The basic rules that apply to the game are similar to standard blackjack but with a few additions. At the start of the game, players will be dealt two common cards after which they can decide on how to proceed with their hand. A different rule included in the game which is not found in other Evolution blackjack games is that dealer must hit on 17. Besides the standard bet, the game also comes with four side bets, 21+3, Any Pair, Bust It and Hot 3. There is also the inclusion of the Six Card Charlie rule where players with a total of six cards with values equal to or less than 21 win the round automatically. This rule applies even if the dealer has a blackjack. The default Return to Player rate of Infinite Blackjack is 99.51% but this can change when a side bet is placed. The game is available to play 24/7 and it also comes with an information pane that explains all the moves players are allowed to make. There is also an icon on the right side of the game screen that shows how many players are playing the game simultaneously.

Infinite Blackjack game is designed by Evolution Gaming to accommodate an unlimited number of players. While the game follows the basic rules of standard blackjack by allowing players to Hit, Split, and Stand, the addition of the four side bets makes it more interesting. The fact the game has also been designed to work on mobile devices will make it possible for players to play it on the go.