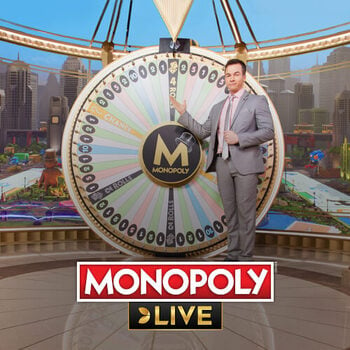 The world's most popular board game has been transformed into a live-action phenomenon which is adding cachet to the live casino scene. Become one of the privileged players who get to become the stars of their very own live show, with a friendly and entertaining dealer to guide you along. 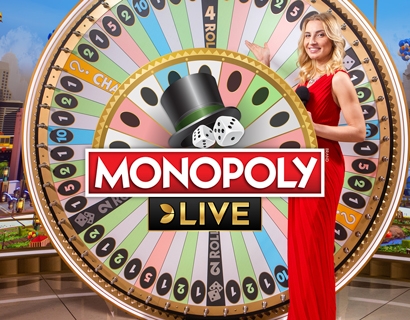 In order to play Monopoly Live, all you need to do is correctly predict the segment upon which the marker will stop. Do that right and you will win the odds according to the segment. Monopoly Live online is much faster than the traditional board game, so you can even play on your commute.

When you play Monopoly Live online, thrills are never far off. Evolution Gaming has included six special segments which don't simply give you a multiplier win but instead activate one of several superb bonuses.

Chance cards make an appearance in two of these special segments. Land a Chance and you could receive an instant cash prize or a unique multiplier bonus. The Monopoly Live wheel also has three 2x Rolls and one 4x Rolls segments.

There's no question about it, the multiplier bonus is one of the game's best features. With it, you could win up to £500,000.

If you place a successful bet on either the 2 Rolls or 4 Rolls, you are instantly transported into Mr Monopoly's virtual world. Dice are rolled in the studio, and according to their result, Mr Monopoly will move along the boardwalk. The entrepreneur will walk the combined total of the two dice. Whenever he stops, he will pass on the corresponding prize to you.

During the immersive bonus game, if you happen to roll a double you could get an additional roll.

Smaller prizes are available at squares representing Utilities, Railway Stations and Free Parking. Watch out for houses or hotels built upon certain streets, as these will provide you with much more lucrative prizes.

The boardwalk also features the popular Chance and Community Chest squares. Land on either of these and, just like in the original board game, you could get a prize or end up paying a fee. If you succeed to pass GO, Mr Monopoly will double all your prizes instantly.

Your Monopoly Live online adventure can take many unexpected turns. If Mr Monopoly lands on the Go to Jail square you will need to roll a double to get him out. No matter if you succeed or not, the prizes you've accumulated until then remain yours to enjoy.

Genting Casino is offering you the opportunity to play Monopoly Live online on desktop, smartphone or tablet. Log into your account now and immerse yourself in the magic of this live game.