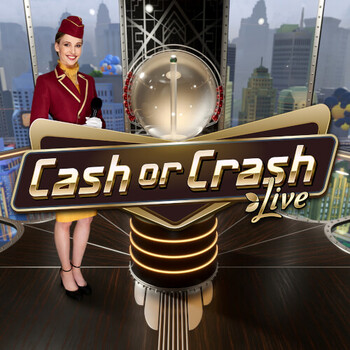 Produced by
Evolution Live
Aside from having a high RTP and a large cash payout, Evolution's Cash or Crash Live is also simple to play. As you play, you'll quickly figure out how it works. There are no distractions in this room. There are no side bets or additional bonus rounds. Instead, this game is all about the climb and knowing when to bail. If you can make it to the top in this blimp-themed game, you might earn 50,000 times your original bet!.

Cash or Crash is similar to the traditional Liar's Dice but with a larger degree of player control and more strategic and tactical alternatives.

Players begin with identical ten-card hands, each with a different quantity and combination of the game's three commodities: Gold, Wheat, and Oil. To begin the round, each player "invests" two of these cards by placing them face down in front of him.

Players make accurate judgments about the true value of the market (i.e. the total quantities of each commodity present among all players' cards) using their own secret information (the cards they've invested) and the other players' bids while attempting not to give too much away themselves.

The bidding begins with one player predicting the least number of a certain commodity present among all players' cards, such as "Five Wheat." Following that, the next player must either raise the price or "sell," thereby disputing the preceding player's bid. Players can opt to increase the quantity (e.g. "Seven Wheat") or add a commodity to make a combo bid when upping the bid (e.g. "Five Wheat and Gold," meaning that there are at least five of each).

A player who is stuck and doesn't want to raise the bid or challenge has a third option: investing one additional card (up to 4) to completely alter the bid to a different commodity (or combo), such as switching from "Five Wheat and Gold" to "Six Oil." The catch is that if the player is the round's final loser, this additional card increases the player's potential losses.

When a player sells, all of his cards are revealed, and the challenge loser loses all of his cards: his initial two, as well as any more cards he invested to change the price. A player who has no cards is eliminated, and the winner is the last player standing.

Cash or Cash is a game that can be played in groups of two to eight people (with the usual caveats about player elimination when playing with a large group, i.e. make sure there's something to do for those who leave early), and it comes with two additional game modes and an optional "doubling" rule to suit different groups' preferences.

The simplicity of playing Cash or Crash Live is what allows it to appeal to such a large number of players. The decisions you make during each round in the cash or crash game, on the other hand, make it an interesting release to play.