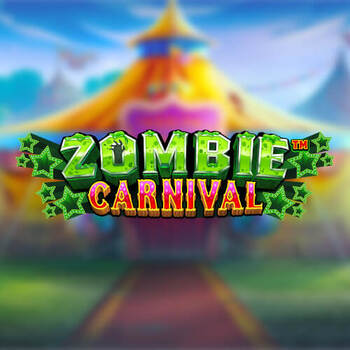 Roll, roll, roll! Get ready to enter the Circus of Horrors!  Players are taken to a circus tent in Zombie Carnival, but there are no living inside! Anyone who is anxious should not worry in this situation. With a putrefying strongman, bear, clown, human cannonball, and ringmaster on the reels, the Zombie Carnival slot machine features a playful design.

Pragmatic Play added individuality using an undead angle to distinguish their circus-themed slots from the market. When coming up with fresh concepts, the combination of zombies and carnivals doesn't exactly come to mind right away since it hasn't been done much in books or video games previously. While Zombie Carnival may not quite reach Cirque du Soleil's mystical heights, it does have everything necessary to provide a satisfying time of entertainment. The team has combined a collection of mechanics and features together to produce the kind of bundle that led to a pleasantly enjoyable testing session. Another excellent aspect of Zombie Carnival is its 4,096 ways to win pay system, which triggers a win whenever at least three matching symbols appear on adjacent reels starting from the left. Eight standard payouts can be found on the board, including four zombified characters as the high payouts, earning 1.5–5 times the stake for six winning combinations, and J-A symbols on the bottom side, worth 0.7x the wager for six of a kind. Although they never appear in the base game, wilds do exist in Zombie Carnival.

If Zombie Carnival were a real circus, it definitely wouldn't be the kind of show that has been touring the world's great cities for decades, leaving audiences in utter shock every time. Sign up for Zombie Carnival at Genting Casino, which is accessible through any mobile device, and enjoy a carnival experience like you've never seen before.