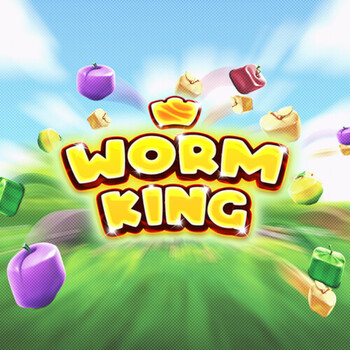 Bright and cheerful, Worm King takes you to a magical adventure where a generous ruler rewards a plenty of modifiers to increase your chances of winning. The Bonus features include Mega symbols, Multipliers, Fruit Bomb, Berserker, and Call to Arms.  Available on any device, place your bet from 0.10 to 100.

Set in a 7x7 grid using a cluster pays system, winning combinations are formed when four or more matching symbols land on adjacent positions. Four brisk worms of different colours are the regular pays, each awarding 50 to 200 credits for a winning cluster.  Apples, watermelons, plums and lemons are worth up to 9 coins.  Superfruits are created when regular fruits form a cluster of 2x3, multiplying wins from x2 to x5 when part of a combination.  Wilds are the golden apples which are randomly thrown by the Worm King in stacks of 3 to 9 symbols paying 500 credits for a combination of 15 icons.

The Worm King hides behind a stone bestowing one of the four bonuses when 25, 50, 75, or 100 icons are collected in one bet. In the Berserker feature, the Worm King chooses from 2 to 4 worms of the same kind and clones them. Worms then replace 2 to 7 fruits to increase your chances to form a bigger cluster.  Call to Arms is when the king picks one worm and transforms all fruits of the same color into worms.  The Worm King makes all fruit of one kind explode in the Fruit Bomb where fruits of other kinds on adjacent reels are blown off.  Finally, the Worm King himself grants a bonus when you collect 100 winning symbols.  He creates a 3x3 Mega Wild and after all wins are counted, this wild splits into two Wilds of 2x2.  When all payouts are gathered, the King splits the wild again where you receive 8 single wilds.

Register to Worm King on Genting Casino to play.  Enjoy the game responsibly and stop if the game is no longer fun. Always set a budget when playing for real money.