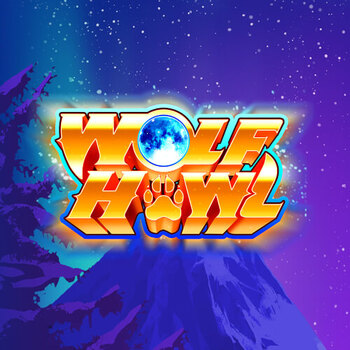 Produced by
MicroGaming
Two leading game providers bring a game that takes players to the wilds of North America in Wolf Howl slot. Iforium collaborates with Microgaming in providing an interesting game with amazing features such as 2x and 3x multipliers in addition to Free Spins, Wild Call bonus game and Scatter Adders. The Return To Player(RTP) rate is quite unique as it's adjustable. Step into the North American wilds with Wolf Howl

To play Wolf Howl slot, players need to use their mobile phone or desktop and play it online. Players also,get to enjoy a flexible Return To Player (RTP) rate, which is set at 96.15% but slightly changes to 96.42% if they buy free spins. Additionally, the sound of a babbling stream and the cries of a howling wolf execute a wonderful theme on the game.

When playing Wolf Howl slot online, players will meet a 5 reel with 3 rows game interface with 10 possible paylines. Also, to place a bet, players require a minimum of £0.10 and a maximum of £10 which is quite affordable compared to many games. On the reels, they will meet several symbols such as A-J card symbols, eagle, rabbit, and the brown bear.

When choosing to play Wolf Howl slot online, there's a chance to win a maximum of 25,000x the initial stake although this might not be easy as the game is highly volatile. Additionally, players should watch out for the moose symbol which rewards 3, 6 or 20 times their placed bet when they land 3 or more of them on a payline.

In the base game, players will meet 1x, 2x, and 3x multiplier wilds which may appear on the middle three reels. To combine their values together, players need to land more than one multiplier wild in the same winning combination. An example is if a player lands a winner with a 2x and 3x wild multiplier, their payout gets a 6x boost.

Free spins are quite lucrative and to unlock the free spins feature, players only need to land 3, 4 or 5 scatters on the reel on the same spin which guarantees them 8, 15 or 30 free spins. Additionally, if a multiplier wild be held next to a scatter, its value is added by 1x. Note that the scatter symbol is marked by the moon symbol.

To make the base game of Wolf Howl more interesting, the developers have added a little something extra by adding in the Scatter Adder feature. This fun feature helps in unlocking the bonus game but there is no way of triggering it as it appears randomly, and anytime it appears, about 2 to 4 scatter symbols are added on the reels.

To play Wolf Howl slot, players only need to visit Genting Casino Casino to stand a chance of qualifying for the top prize of the 25,000x stake. Additionally, the game has several ways of gaining rewards through multipliers and free spins although, this is a high volatile game meaning, scoring the big wins might not be easy but players will definitely enjoy this amazing game.