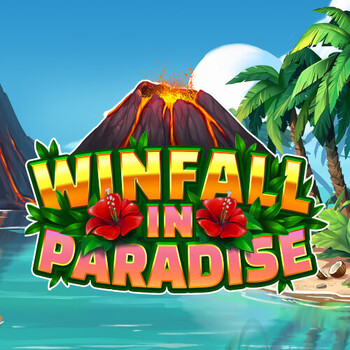 Produced by
Yggdrasil
It’s fabled that once every century the volcano of WinFall island will erupt causing massive tidal waves and explosive hurricanes that destroy everything in its wake. Make it through the disaster, however, and you’ll be deemed worthy to recieve amazing riches, so keep your eyes peeled on the volcano and be prepared to duck and cover when you play WinFall in Paradise.

About WinFall in Paradise

The WinFall in Paradise slot machine is the creation of Yggdrasil gaming, and takes place on a stunning tropical island complete with warm sands and tranquil waters. Don’t get too relaxed though, as with this slot machine, things could heat up at any moment as the volcano that waits upon its shores can erupt at any moment. You’ll want to tread carefully, when you play the WinFall in Paradise slot because the aim of the game is to make the volcano erupt as this will trigger the Feature Wheel bonus feature.

When players trigger the feature, first the volcano will erupt and award players their highest win to date, which will then cause the Wild Wave to hit the reels adding 2-20 wild symbols to the screen. Lastly will come the crashing Hurricane Wind which will remove low-value symbols from the reels. This combination can lead to some pretty impressive payouts.

WinFall in Paradise at Genting Casino

The WinFall in Paradise slot machine takes a usually relaxed tropical theme and shakes things up with the forces of the elements. With the incredible feature wheel being able to be triggered from the first spin, the anticipation is high in this slot game, and each resulting spin and lava symbol has us holding our breath wondering if it’s time for the Win-it-All volcano to blow its top.

To see if you have what it takes to brave the elements and walk away with a tropical bounty, give the WinFall in Paradise slot machine a try at Genting Casino.