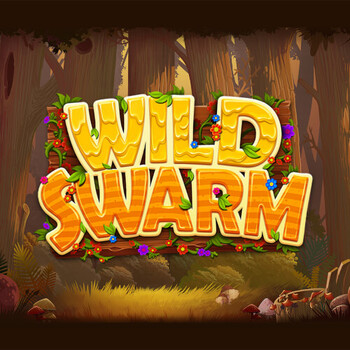 Produced by
Push Gaming
If you go down to the woods today, you could win up to 3,100x your bet, free spins, and a host of other prizes! Wild Swarm is a charming slot from Push Gaming, with some sweet bonus features that can help you grab generous prizes. Try to collect bees, trigger the Swarm Mode feature, choose wisely in the Pick feature, grab instant prizes — there’s so much to discover in Wild Swarm! Wild Swarm is a 5 x 4 slot with cute graphics, adorable bees, and irresistibly exciting music. Push Gaming has created gorgeous symbols and a fantastic forest setting, with detailed trees, grass, bushes, and animations. While you play, you’ll see that the hive above the reels sways from side to side and leaves drift to the ground. Even the sunlight scattered across the tree trunks looks impressively realistic and adds depth to the environment.

The symbols include a mix of bee-related pictures and standard royals, paying out various wins depending on how many appear on the game grid. The dollar sign coated in honey awards the biggest prize, offering the following payouts:

The Queen Bee symbol is another high-paying slot, awarding 15x, 5x, and 1x your bet for 5, 4, or 3 on a payline, respectively. Match 5 Honey Pots to win 10x your stake. The White and Purple Flower symbols pay 7x for 5, while the royals award the lowest prizes in Wild Swarm.

The Wild Swarm slot game includes 2 Wild symbols: the Wild Honey and the Sticky Wild. Both Wilds substitute for every other symbol except the Scatter and Chest symbols.

The Sticky Wild appears during the Free Spins and Swarm Mode features only. Sticky Wilds stay fixed in their positions for the duration of either feature.

The Hive symbol is Wild Swarm’s Scatter. Land 3 or more anywhere on the reels to trigger the Free Spins feature.

Three or more Hive Scatters on the game grid, regardless of their positions, will trigger the Free Spins feature. However, you can trigger it as one of the Pick feature’s instant prizes, too.

Land a Chest symbol in any position on the game grid to trigger the Pick feature. You’ll see 5 mystery instant prizes to choose from — pick one to reveal it.

Instant prizes available in the base game include:

In the Free Spins and Swarm Mode features, instant prizes may be:

The Wild Swarm game is played on a 5 x 4 grid, via a streamlined control panel. Tap the SPIN button to spin the reels and see if you can land matching symbols on one of the 20 paylines. Match 3, 4, or 5 of any symbol to create a winning combination (though the Dollar symbol awards a prize for 2+).

Click on the arrow button next to the TOTAL BET display in the middle of the control panel to open the bet settings screen. Here, you can choose from several stake options, ranging from £0.20 to £20. Your current bet, balance, and winnings are visible on the control panel while you play.

One of the most distinctive elements in the Wild Swarm slot online is the Collectable Bees feature. Any Bee symbols that land on the reels, in any position, will fly into the Hive at the top of the screen. A Wild Honey symbol will remain in its place.

The number of Bees collected is displayed in the circular metre next to the game grid, with a tiny hive indicating the target amount.

If you collect the maximum of 5 Bee symbols, the Hive may explode whenever a Bee symbol lands in any position on the reels. This will trigger the Swarm Mode feature.

What is the maximum bet for Wild Swarm?

You can make a maximum bet of £20 on Push Gaming’s Wild Swarm online slot.

What is the minimum bet for Wild Swarm?

Can I play Wild Swarm on mobile?

Yes — Wild Swarm can be played on mobile devices.

What is the RTP of Wild Swarm?

What is the biggest potential win for Wild Swarm?

The biggest potential win in the Wild Swarm slot machine is 3,100x your bet.

About the Game Provider: Push Gaming

Push Gaming was founded in 2010 and is situated in London, with an ever-growing team of mathematicians and game designers. Jammin Jars, Joker Troupe, and Fat Rabbit are just a few of the ground-breaking games that the firm has created over the last decade. Push Gaming is licenced to operate in the United Kingdom, has a Malta Gaming Supply License, and is an Alderney Associate Supplier. All of these certificates demonstrate that the developer is committed to operate lawfully in regulated marketplaces and ensuring that its players are properly looked after. Push Gaming also collaborates with BMM Testlabs and eCOGRA to ensure transparency and fairness. Push Gaming is best known for pioneering new slot features, and exciting mechanics created by the studio include Jammin Jars 2, Humpty Dumpty, and Viking Clash.