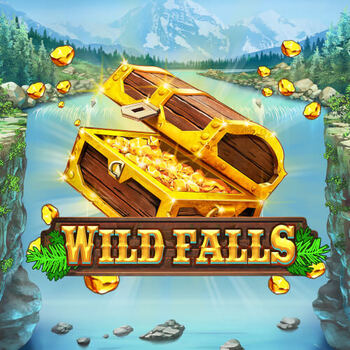 Produced by
Play N Go
Wild Falls marries classic casino with creative, visual innovation. It cranks up the excitement levels by giving players an enhanced view of upcoming wilds. The perspective river view above the reels allows us to get a huge amount out of a very small amount of space - players won't want to stop spinning when they can see how many wilds are approaching! The reels are set against the backdrop of the Yukon River area in Canada, and a raging waterfall. Valuable Treasure Chests, which are both Wilds and Scatters, flow down the river, over the falls and may stick on the reels. The Chests are independent of the reels and can only land on reels 2,3, and 4. The wild is applied to all applicable paylines.

In RIVER OF GOLD Free Spins, instead of the chests falling off the reels after a spin or respin ends, they walk or move down one position in the reels until they fall off the bottom. The feature triggered by having 3 scatters/wilds on reels 2,3, or 4. New wilds come rushing down the river and are added to the reels, just like the main game. The RIVER OF GOLD free spins will keep spinning as long as there is a wild chest on the reels.