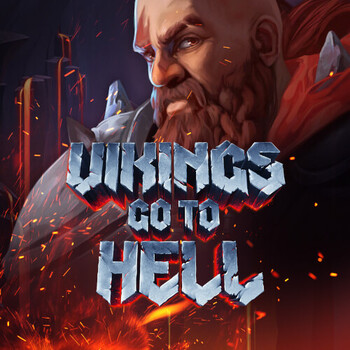 Produced by
Yggdrasil
The intrepid Vikings return for their most tumultuous challenge yet against the fearsome demon hoards of the underworld in Vikings Go To Hell.

Travel with the Vikings to the dark netherworld in a game that comprises five reels and 25 paylines. There are four Viking symbols and four weapon symbols that win if three or more are lined up in sequence on a payline.

There are Sticky Wilds, Base Game re-spins and more. In Vikings Go To Hell slots, Free Spins fuel the Vikings' fury as they vie to vanquish the deadly demons. Collect rage points when every wild does battle with a regular demon, The Lord of the Chains or Lucifer. When you collect 100 rage points on one Viking, you will trigger seven Berzerk Free Spins, which provides plenty of pillaging pay-out potential. All new players receive 50 rage points for one Viking.

Get on a hot streak when you play Vikings Go To Hell slots, for when the Treasure Chest symbol appears on the last reel in the base game, an Epic or Good tablet is awarded. The Epic Tablet can provide 12 or 16 Free Spins, a 30 rage-point boost for all Vikings, or 600-1,200 coins. The Good tablet can offer seven Free Spins, a 30 rage-point boost for one Viking and 150-300 coins. It is sure to have you burning with desire to destroy the dreadful demons.

It's time to let your wild side loose again. Vikings Go To Hell slots is a devilishly delightful game, full of adrenaline-pumping action, with legendary-win potential.

So, if you are up to fighting loathsome Lucifer and want to rampage against other heinous, fiery creatures from Hell, do not despair, you can now play with ease on desktop, tablet or on mobile devices. Skol.