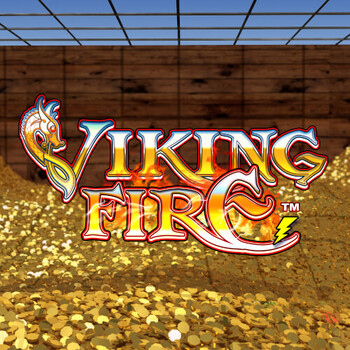 Embark on an adrenaline packed adventure with the viking themed game - Viking fire. Relieve the barbaric times of the vikings of old through the help of your trusted and funny viking companion as you fend off other enemies and gather the treasures you seek.

Viking Fire is a bet 50, five by 4 reel 40 line game slot. The game is action packed by Three dimensional animated characters and celebrations. Players can shoot at boats to reveal extra Wilds and extraFree Games as an extra feature on a two stage bonus. You enter a viking dungeon upon entering stage 2 which is full of treasure bounty for the taking.

A wild hammer symbol means that you get double the reward. The game is set at a high volatility that stems from the fantastic and interactive bonus game which allows the players to win Free Games with up to about four symbols acting as wilds.

As you embark on your journey in this themed game, a friendly yet hilarious viking interacts with you during the game in various ways. This viking will jump and begin hitting the reels making them stop on guaranteed big wins. You will have an opportunity to trigger the bonus through three or more fire balls. The Viking character runs off to start firing balls at waiting boats. The player will have the option to fire at any boat to fire at. Once the player hits a boat, this may reveal an extra wild, an extra free game or it may retaliate and shoot back at the player's viking companion.

Viking fire is a very interactive well-themed game that provides a lot of cross play between the game theme itself and the players. Adorned by humorous three dimensional characters and viking elements and tradition. That game proves to be an exhilarating ride that will provide a lot of adrenaline and excitement.

Discover more features and treasures like the brave vikings of old. Be sure to play and bet at your comfort.