Play Valley Of The Gods Slot 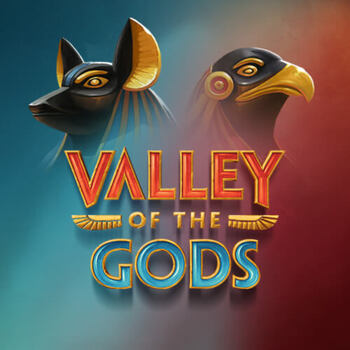 Produced by
Yggdrasil
Take a trip into the Valley Of The Gods and unlock ancient mysteries and treasures beyond the imagination of mortals.

Unravel intriguing symbols to discover winning combinations in the enticing Valley Of The Gods slots online, which offers five reels and five rows of secrets to unravel and up to 3215 ways to win!

There is a re-spin with every win, giving you the chance to broaden your game area while solving the riddles that lead to riches. Valley Of The Gods Slot Feature

The alluring game has 10 regular symbols that pay if three or more of the same kind appear in consecutive columns. The four high-pay symbols are represented by great gods Horus and Anubis, and the six low pay symbols are represented by hieroglyphics. There are also blockers which have an indent of a Scarab on them that block reel positions until they are destroyed by landing winning symbols.

Play Valley Of The Gods slots online and enigmas turn to wonders when you clear the whole area, for you invoke ancient incantations, which grant you huge treasures and near immortality in the form of huge multipliers and extra lives. Release the 12 blockers by hitting on a golden scarab. If there are no more blockers on the reels, you will crack open those win multipliers and extra lives.

Lucky Scarabs emerge from winning red, orange, purple or pink symbols and are collected towards the extra lives feature. Players can increase their lives collection by one for every five red scarabs they collect.

Land on the winning symbols and clear the blockers in the mesmeric Valley Of The God slots, and you will also decipher incredible win multipliers. Destroy the blockers and the x2 multiplier will reveal itself and take you further down the path to unveiling the game's golden treasures.

Scarabs emerge from winning blue, teal or green symbols and heighten the chance of riches. They are collected towards the win multiplier feature and you can increase the multiplier by one for every five beautiful blue scarabs collected.

Let your imagination run wild as you open the door to the new win multipliers, which are added at the end of each re-spin. The multiplier is applied to any win following a re-spin and the total win is added to your balance once no more winning combinations are present and you have no more lives.

Are you ready to travel through the forgotten pathways of Ancient Egypt and liberate an abundance of treasures? Then you are ready to solve the riveting riddles hidden in Valley Of The Gods, which you can now play on desktop, tablet and mobile devices.