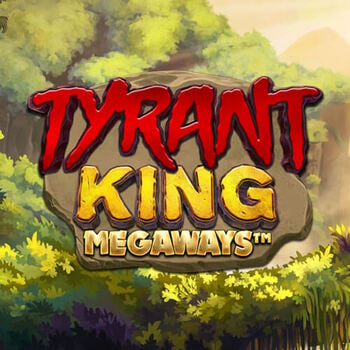 Produced by
iSoftBet
This slot uses a Megaways engine that offers 6 reels and 117,649 paylines. The RTP is slightly below average at 95.99% while the volatility lies between the medium and high range. Additionally, the maximum win is 50,000x the stake.

Fans of dinosaur-themed games are in for a blast with the Tyrant King Megaways video slot from iSoftbet. The game takes players back to the prehistoric times when the now extinct creatures prowled the planet.

Symbols available on the game's reels include low paying A to 10 playing card royals. The premiums on the other hand, are represented by a cavewoman and various dinosaurs such as triceratops, pterodactyl and stegosaurus.

This bonus feature activates when a win forms on the reels. As a result, the winning symbols vanish from the grid and new ones appear to replace them. The feature keeps on running provided successive wins are created.

Landing 4 symbols during a spin will activate this feature. Consequently, the game awards 3 respins on a new grid containing only wilds and blanks. If another symbol lands, it locks in position and an extra respin is awarded.

Before playing the game, a bet must be placed. This can be done with a minimum of 0.20 coins and a maximum of 20 coins. After this, a player will need to click on “Spin” to launch the game.

The game's reels will start spinning. When they come to a halt, and two or more alike symbols land on adjoining reels, a win will be created. The game will then calculate and award a payout.

What is the maximum bet for Tyrant King Megaways?

The maximum bet of Tyrant King Megaways game is 20 coins.

What is the minimum bet for Tyrant King Megaways?

The minimum bet of Tyrant King Megaways slot is 0.20 coins

Can I play Tyrant King Megaways on mobile?

What is the RTP of Tyrant King Megaways?

The RTP of Tyrant King Megaways slot machine is 95.99%.

What is the biggest potential win for Tyrant King Megaways?

Players can win a maximum of 50,000x their total stake.

iSoftBet graces UK online casinos with lots of games. Players will get the opportunity to enjoy games like Wild Hammer Megaways, Pyramid Pays, Ancients of Korea, Golden Gallina and Piggy Bank Megaways. These games have been launched recently.

Besides that, iSoftBet also offers players more online slots to chose from to enhance their gaming experience. Among the games available include Wild Ape, Merlins Magic Mirror, Prosperity Ox, Lucky Clover, Scrolls of Ra and Bewitched.

At Genting, players can access and play different categories of games. They include table games the likes of craps, roulette, baccarat and blackjack. In addition, there are also live casino games such as Immersive Roulette and Dragonfire.