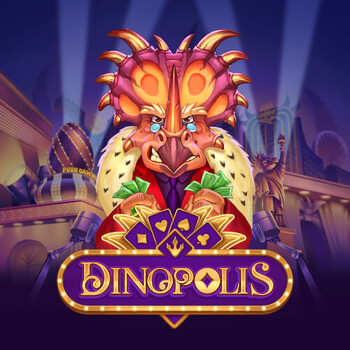 Produced by
Push Gaming
Get back in time to the prehistoric age with the Dinopolis slot, a release from Push Gaming. This game takes players to a casino city where dinosaurs place bets, roll the dice, and collect wads of cash. Dinopolis comes with lots of thrilling bonus extras. They include wilds, free spins, and Dino Coins that can deliver multipliers of up to 1,000x.

Meet the dinosaurs in the Dinopolis slot

Players can play Dinopolis on a 5 reel grid that’s configured in a 3×4×4×4×3 layout hence offering 576 paylines. Creating a winning combination involves landing multiple identical bonus symbols on the reels, starting with the very first reel. The game's RTP is 96.4%, a figure that is slightly more than average. In addition, the maximum win is 50,000x the total stake.

Dinopolis slot online is available to play with a friendly betting range. The minimum stake is 0.10 coins per spin while the maximum stake is 100 coins. However, the size of the bet can still be adjusted by clicking on the arrows situated next to the interface. The volatility of the game is high with the biggest wins emanating from the bonus rounds.

Players will come across a dinosaur theme when they play Dinopolis slot. The backdrop features the bright lights of the casino city and the reels hold a vast range of symbols. They include six dinosaurs as well as casino chips, dice, playing cards and wads of cash. The most lucrative of the dinosaurs pays 10x the stake for five symbols on adjoining reels.

Players will find three special features in this slot game. The first is the Multiplier Wilds feature which is triggered when the wild symbol lands on the grid. The wild comes with multipliers of 2x and 3x which will double or treble any payout. Apart from that, it also does its normal role of substituting other symbols when it's included in a winning combination.

The second feature is the Dino Coin Symbols feature which triggers when Dino Coins appear on the first and fifth reels. These coins come with multipliers ranging from 1x to 1,000x, and they'll award an instant payout if wilds join them in the middle three reels. The payout amount will be determined by the value of the coin that appears on the reels.

Lastly, there's the Dino Bonus feature which activates when scatters land in the middle three reels. Consequently, players will need to pick two playing cards. The first card will award up to 10 free spins while the second one will award a random Feature Pick Prize. The prize may either be Sticky Stack Wilds, Golden Card, Single Reel Multiplier Booster or All Reel Multiplier Boost.

Push Gaming is here again with a banger of a video slot in the name of Dinopolis. The dinosaur theme is great and the visuals plus soundtrack make things even better. In terms of features, the Dino Coins can add spice to the gameplay and the free spins will provide decent winning opportunities. What's more, a maximum payout of 50,000x the stake is on offer.