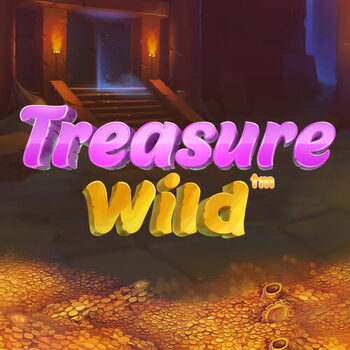 Produced by
Pragmatic
Treasure Wild is a slot from developer Pragmatic Play which is true to its name. This is seen in the actual mixing of treasure with wilds. Throughout the game, the graphics continuously depict treasure colourfully, while the money symbol collection depicts wilds. Just as the name suggests, the rest of the game has a little slapdash feeling as if it was hurriedly knocked together without a thorough think through. But, we shouldn't be so quick to judge, let's give the Treasure Wild some breathing space and hopefully we may get charmed as we delve deeper.

Without doubts, the game's first impression was rather underwhelming. You are greeted with loads of gold stuff strewn around the place, bunches of glowing lights piping from behind the scene, and an odd chest floating to the side. There is no blazing personality, just a dump of treasure depicted by shiny stones or metals. I guess that is okay, since you can use it to purchase some cool stuff, but the game lacks a depth experience throughout.

It has a 5 reel, 20 payline grid where all the action takes place, the Walt Disney-esque sounds being one of the Treasure Wild’s most catchy aspects. The base of the game is laced with a soundtrack whose piratical tendencies is more obvious than its dramatic flows, which frustratingly depicts a conductor surrendering themselves to music enthusiastically, thereby conjuring a symphonic performance of a lifetime. Both the soundtrack and the trigger free spins resemble a 60s era Star Trek.

Treasure Wild can be played on any device with the Pragmatic stake range of 20p/c all through to £/€100 for a spin. The game's math model has been rated 5 out of 5, making it a highly volatile slot.

The golden crown money symbol appears on all reels, with values of 0.5 to 50 times the overall number of bets. It collects all of their values if a wild symbol lands the same time a money symbol does. The overall value of all the money symbols is awarded for every wild symbol in view.

The free spins is triggered when at least 5 money symbols are obtained in the base game. When this happens, you get 9 free spins, and this starts after the collection of the value of the triggering money, as this would be used as the beginning value for the progressive feature. If a new money symbol is gotten in the game, its value is added to the overall value in the chest. You cannot retrigger free spins. The current total value is awarded whenever a wild symbol lands on a free spin.