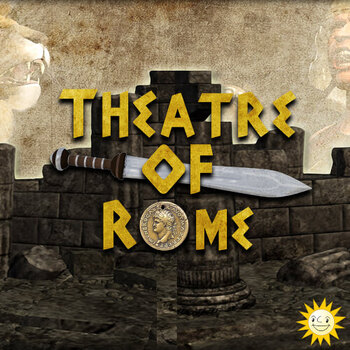 Ancient Rome has such a rich history which is linked to entertainment and power. They have seen this in the coliseum where huge events are staged such as Gladiator fights, public gatherings and more. With this, Merkur Gaming developed Theatre Of Rome online slot game which interestingly has cultural and historical relevance.

Theatre Of Rome is played on 5 reels with three rows, for now it has only  7 active lines. Though it can deliver up to $4,000 each, yet stakes can also grow big with wilds scatter and free spins. Bets start at 0.10 to 20 per spin, usually the game also uses 10 coins for a 7 line setup. There is also a special max button so you can easily bet on the maximum  while on play.

There is a great list of prizes that you could get from the Theatre of Rome, such as  the regular Lion symbol that forms a combo and will pay up to $4,000. Though not as big as the others, you can actually get more through multipliers plus with an RTP of 96.02% is actually a great number.

The feature symbol for this game is the  Gladiator, which is  usable in the game as a trigger for 5 free spins. It only needs to appear three times to activate the bonus feature. Once you do trigger the free spins, the Gladiator will start being used as a substitute as well, so it’s going to be the wild for that particular feature. It doesn’t do anything of the sort during paid spins though.

There are also major symbols such as a Lion, a helmet, a shield, boots, a bracelet and the usual card symbols of Q,K, A, J, 10, & 9. Each having a multiplier that will determine the payout along the payline.

Theatre Of Rome offers a simple gameplay and win structure plus a competitive RTP. The Roman  aesthetics integrated with the game design give the ambiance of being part of a Gladiator match where stakes are also made.