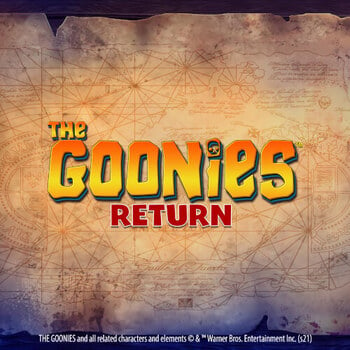 Produced by
Blue Print
Get ready to watch Chunk and his legendary Truffle Shuffle, save the pays and more by sloth swinging in and be met with new features filled with lots of hidden surprises!

The Goonies Return, a sequel to the release of 2018, dares to offer an identical style of gameplay, with much better graphics, and hopefully other extras that can be built on original ideas, keeping the fans from the older slot in the game for a few more years. It promises to be branded just like the original game that is based on a movie from the 80s. The first game showed high volatility and huge top payouts. If you're an expert or you've been in the game for years, you may have something to look forward to in the return of the Goonies.

Just like the original, the return will also have 5x3 reels and 20 paylines. However, big improvements have been made to the potential of the slot, such as wins of 50,000x the stake already on the table. The RTP remains at 96%, which is an added advantage. Some other features were added, such as the bonus symbols, the Medallion Wild, 7 modifiers, and 6 bonus features that are based on the modifiers.

It is not just a branded game, it is a very well made branded game. It has icons with the same characters as those from The Goonies that are designed in a comical style that is lovely. It's symbols evoke images of One-Eyed Willy, Pirate Flag, Chunk, Data, the Medallion, Mouth, the four Royals from the top (J-A), and Mikey.

To play, you have to pick a wager that is between £0.10 and £100. The whole game area becomes at your disposal. You're likely going to love the top prize delivered here in the Goonies Return. With a 50,000x stake, the impact on anyone's budget will surely be overwhelming.

This is one outstanding feature among the many features of the Goonies Return slot game. This bonus feature has about six different triggers. You will be needing 3 scatter symbols to activate this feature. When activated, you get a bonus wheel that will spin and trigger.

The skeleton organ free game has 5 free spins, with stacked symbols on the reels that are sticky. When you land a special symbol, they all turn to a single type of symbol. At the end, other bonus games or free spins can as well be triggered.