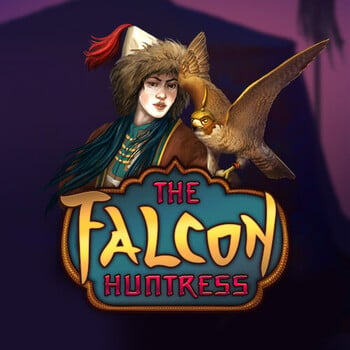 Simple yet stunning, with its intricate scene and music which captures the ancient Mongolian culture and tradition. The Falcon Huntress will transport you back in time, to venture rugged and wild lands of the Orient. Join a young woman and her bird of prey companion in uncovering various rewards within the temple. This game utilizes 5 reels, 9 fixed pay-lines and a winning potential of 10,052x of your stake. Another good thing about this game is it has an awesome Return to Player Rate of 96.1% You can set the bet from a minimum of 0.10 up to a maximum of 100.

The reel symbols you'll see are K, A, J, and Q, plus graphics including falcon eggs, feathers and Ayak baus (a decoration used on the falcon). With 10 playing cards. The highest value symbol is going to be Falcon Huntress herself. If you have a payline comprising two, three, four or five, you will get 1.5x, 10x, 50x, or 500x your stake respectively. The game features expanding win and a bonus game with free spins and re-trigger.

The Expanding Feature not only triggers in the bonus, but also in the main game. In the main game however it happens randomly and can trigger at any spin. However, the wild symbol will never expand.

It's possible to trigger a maximum of 10 free spins which is done by landing 3 or more Scatter symbols.

The Scatter and Wild symbols both share the same symbol - the owl. It is possible to re-trigger with 10 extra free spins in the bonus by landing 3 or more Scatter symbols.

Register to The Falcon Huntress on Genting Casino, playable on all mobile devices. Enjoying the game is awesome, but always be mindful of your bets and only go with what you're comfortable with.