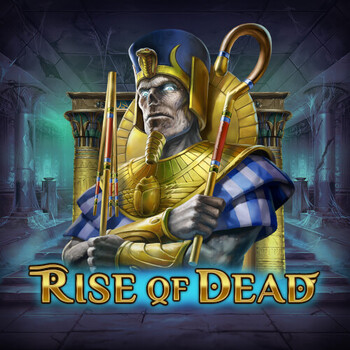 Produced by
Play N Go
Rise of the Dead Online Slot is a 5-reel, 3-row slot with 20 paylines. This thrilling online slot game provides players with a great online gaming experience, with Mega Stacks and free spins to help you land some amazing payouts. Players can place bets ra

About Rise of Dead

In this Rise of Dead slot online, the three mummified pharaohs Ramses, Thutmose, and Amenhotep are the three highest-paying symbols, while the sacred Golden Scarab serves as the Wild symbol. Rise of the Dead is visually stunning, with an ancient Egyptian theme and a dark and sinister feel. Symbols on the reels include A, K, Q, J, and 10 royals, as well as three high-value pharaohs who, to be honest, look a little scary because they are dead. One of them will pay you 25 times your stake if you get 5 across a payline. The scarab beetle is the Wild symbol and it can replace all other symbols except the scatter. It is also the highest paying symbol, paying 125 times your stake for 5 of a kind.

Rise of Dead Slot Machine has three bonus features that reward you with stacks of symbols, unlimited free spins with expanding pharaoh symbols and stacks of wilds, and a random feature where reels 1, 3, and 5 show the same symbol.

Rise of the Dead Game has three bonus features. The game benefits from the Mega Stacks feature, which selects one symbol at random on each base game spin and fills 12 consecutive spaces on each reel. This increases your chances of forming the most winning combinations with that symbol.

The Gift of Gods feature may be randomly triggered in the base game – basically, reels 1, 3, and 5 will be filled with the chosen Mega Stack symbol. This increases your chances of filling the reels with the Mega Stack symbol, which leads to larger payouts. If it's a high-value symbol, you could win 500 times your stake.

Rise of Dead's main bonus feature is the Ancient Free Spins feature, which is activated when three scroll scatters appear on reels 1, 3, and 5. Beginning with 10 free spins, 1, 2, or 3 scrolls on the reels during a free spin will award you with 2, 4, or 10 more free spins, respectively. In fact, the number of free spins you can win is unlimited.

Rise of Dead at Genting Casino

Rise of Dead is playable at Genting Casino. Visit the site to gain access to their enormous selection of slots, table games and live casino games. You can play at the comfort of your own home or wherever you are when you visit Genting Casino online. One of the games offered on the site is Rise of Dead which is loaded with features. The max possible win of 5,000x your stake is good but it gets better with the features that keeps players engaged.