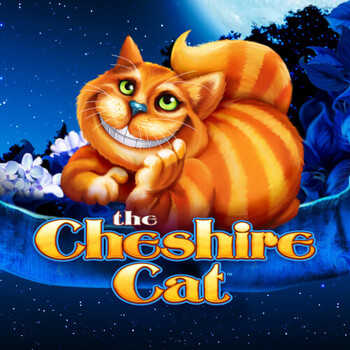 Tumble down the rabbit hole and meet The Cheshire Cat in this fantasy-themed slot from WMS software. Most people are acquainted with the iconic feline fella's cheeky grin. The character has featured in a variety of forms throughout the years, ranging from film adaptations of the original Wonderland storyline to comic books and pop songs. Particle physicists even cite the Cheshire Cat's ability to vanish and reappear as an example for the odd ways particles act at the subatomic level.

The Cheshire Cat has excellent visuals; it is situated in woodlands and has calming music. The symbols on the reels include the Cheshire Cat himself, Alice, the Caterpillar, and the March Hare. Additionally, you see potions, cake slices, and playing cards (A, K, Q, and J). The Cheshire Cat is the most lucrative symbol, paying out 12.5 times your bet for 5 on a payline. It is the wild symbol and may be used to replace all other symbols other than the bonus symbol.

WMS Gaming's The Cheshire Cat slot machine has five reels, four rows, and forty paylines. It may be played on desktop, smartphone, and tablet devices for between 40 and 400 per spin. This epic magical adventure has a ton of added features.

The Cheshire Cat has a Super Stacked feature, which means that one symbol is randomly selected to become a super stacked symbol on each spin, despite the symbols' low value. As anybody acquainted with the character and tale would anticipate, there are plenty of bizarre things going on as you play these free Cheshire Cat slots.

Witness the iconic mischievous grin by signing up for The Cheshire Cat at Genting Casino, which is accessible to any mobile device. We encourage you to play sensibly and avoid playing more than is necessary.