Play The Bandit and the Baron 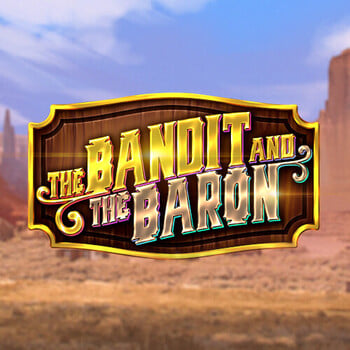 In the Wild West, where you shoot before you ask questions, you'll meet The Bandit and The Baron on the dusty streets of a small village. Go to the Old West with The Bandit and the Baron in pursuit of some hefty wins. A smooth and thrilling game is waiting for you with gold bars hidden beneath your pillows and a six-shooter by your side.

Players who want to enter the realm of banditry and barony may do so on any device, with stakes ranging from 0.20 to 20. Just For The Win shrugged off their low win/low volatility tendencies, and The Bandit and the Baron is another of their high volatile offers, with a 25,000x winning potential. Winning big will need a similarly spectacular run of streak respin. Another statistic is the Return to Player value, which exists in numerous variants; if you want the most theoretically generous, look for the 96.09% version.

Wins occur when matching symbols fall left to right, beginning with the first reel, on its 25 paylines. The game is played on a 5x5 sized grid. Four low-value card suit tiles may be combined with higher-value silver coins, banknotes, gold coins, gold bars, or safe premiums to form winning combinations. The payout for a five-of-a-kind hit with the latter high pay symbols ranges from 3 to 20 times your bet.

Learn to dodge bullets as you sign up for The Bandit and the Baron at Genting Casino, which is available on any mobile device.