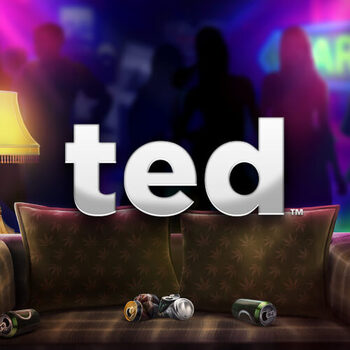 Produced by
Blue Print
Blueprint Gaming has created a Ted slot online based on the iconic film of the same title. It has five reels and twenty paylines.Ted is simple to play on both desktop and mobile devices, even for first-timers. Ted is the wild and highest-paying symbol in

When you play Ted online slot from Blueprint Gaming, you will enjoy the movie's highlights. You'll start with a 95.81 percent RTP and modest volatility. On a single spin, you might win up to 10,000 times your bet. The bet levels range from 0.20 to 200.00, and your selection will be spread throughout the 20 paylines in the 5x3 grid. From left to right, winning combinations can be found. Fans of the slot genre will recognize the Ted online slot because the basic layout is one that we see frequently. If Ted awakens during any game, the Laser Gun Wilds, Psychedelic Super Spin, Beer Streak, Psychedelic Colossal Spin, TV Remote Symbol Streak, or Psychedelic Bonus Boost will be triggered. Each of them causes Ted to interact with the reels in some way, affecting wild symbols, available wins, and so on.

Spinning the Wheel of Fortune can win you multipliers, bonus spins and cash payouts, while the Barcrawl Bonus is a night on the town with Ted, accumulating prizes and bonuses that only end when you land on the Jail square! There are two Free Spins round - one give you a chance to climb a pyramid of increasing prizes with Ted, the other takes you shopping at S-Mart for more jackpot prizes! Finally, the Big Money Bonus Round puts Ted in the centre and gives you the chance to gamble between stacking up more bonuses and multipliers or collecting what you've won before you lose it all!

The sleeping Ted who rests under the reels can stir at any time to activate yet more bonuses, giving you extra chances to win when you're spinning! Whether it's a nudge on some near miss combinations, or wilds spreading out for more matches, Ted has your back!

You can play Ted slots online with your phone, tablet and PC, so whenever you need to, you can go on the town with your thunder buddy Ted! 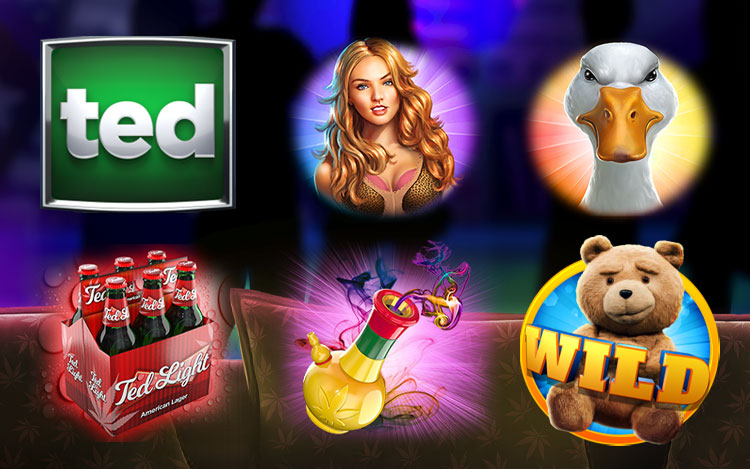 How to Play Ted Slot Online

Ted's game objective is to use the various symbols to form winning combinations based on the paytable. To begin the game, press 'SPIN.' The reels will spin and come to a random stop. You win if a combination of symbols on the reels makes a line of 2, 3, 4, or 5 matching symbols on one of the win lines (beginning from the left). Your winning lines will be highlighted, and your earnings will be added to your account balance. The Thunder Buddies Bonus is triggered when three or more Bonus Scatter symbols appear anywhere on the reels.

Ted may be jolted awake by any random spin. You'll be given one of the six distinct Ted slot machine bonus modifiers. Ted will utilize his laser beam to bounce across the screen, turning the symbols it encounters into infectious wilds.

Psychedelic Super Spin: Ted takes out his hookah pipe and smokes the reels, revealing a Mystery symbol in the process.

Have you ever won a game of Beer Shuffle? Ted will squirt beer over the reels, completely engulfing the symbols in frothy bubbles. The tiles will rearrange themselves, maybe resulting in a new winning combination. This process is repeated until all of the bubbles have popped. Psychedelic Enormous Spin: This is identical to the Psychedelic Super Spin, except instead of the reels combining into one, they will merge into one colossal reel. When you land a win, Ted starts pressing the buttons on his remote while holding the winning symbols.

What is the maximum bet for Ted online slot?

The maximum bet for the Ted slot game is 500.

What is the minimum bet for Ted?

The minimum bet for Ted online game is .20.

Can I play the Ted slot game on mobile?

The Ted online slot is fully compatible with Android and iOS devices.

What is the RTP of the Ted slot game?

What is the biggest potential win for a Ted slot game?

The biggest win is the 5000 from the TED Jackpot.

Since 2008, Blueprint Gaming, a game production firm located in the United Kingdom with headquarters in Newark and Malta, has been a subsidiary of the Gauselmann Group in Germany. Gauselmann is a family-oriented entertainment company whose objective is to deliver engaging games with tiny prizes for small investments. Blueprint, as part of this group, creates and distributes its own original online slot games as well as games for other companies. Blueprint Gaming's diverse portfolio guarantees that the company has a broad appeal that appeals to all types of slot fans. All types of gamers can play the games they desire while remaining confident in the fact that production quality, fairness, and entertainment value will always be assured. Blueprint Technologies Ltd is licensed by the Malta Gaming Authority and popular slot titles created by this developer include Fortunes of Ra Jackpot King, Luck O' The Irish Fortune Spins 2, and Tiki Treasures Megaways.

One of the various games offered at Genting Casino is the Ted online slot. On the site, which has a customer-friendly style, you can play a variety of table games and live casino games. From simple classics to video slots with a variety of bonuses and features, there's something for everyone. You may play Ted slot on your iPhone or Android phone. For a thrilling gaming experience, go to the Genting Casino website.