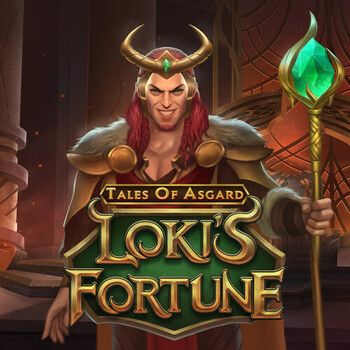 Produced by
Play N Go
Play Tales of Asgard - Lokis Fortune Slot and aid Loki in his quest for mischief! We all know Loki as the fun-loving trickster god. And when his muscle-bound brother Thor is announced to be crowned as king of Asgard, it is up to you and Loki to thwart the coronation plans! Set in the background of Loki’s throne room, this game comes fully-equipped with Norse-themed visuals, icons, and effects!

About Tales of Asgard - Lokis Fortune

Will you win the heart of the merry prince so he can bestow his riches on you? Will you make the most of the free spins, features, and the fabled split mystery symbols found in the game? Only luck can tell! Curry the god’s favour and ask for his blessing as you play the Tales of Asgard - Lokis Fortune slot online!

The Tales of Asgard - Lokis Fortune Online slot is released by Play’n Go. We have seen an increase the in games that feature fantasy and mythology themes. And this one is no exception. And though you might be more familiar with Thor and Odin as the more famous Norse gods. It is time for Loki to shine in his own Tales of Asgard - Lokis Fortune game.

The slot has 5 reels and 5 rows that provide 3,125 paylines. With Loki on the scene, you can expect a game with high volatility with up to x20,000 for a max win. The trickster god allows for a £0.10 minimum bet up to a £100 maximum bet. But the beauty of the game lies not only in its visuals and story, but in the possibility of having up to 100,000 paylines due to the wonder of splitting symbols!

The Tales of Asgard - Lokis Fortune slot machine has a lot of features inside its bag of tricks. The most critical feature is the Mystery Symbol. These can land in any position and start off as an inactive blocker tile. But when a Wild symbol also lands, the initial Mystery symbol are automatically converted into the same paying symbol type! The first kind of mystery symbol converts a single pay symbol, while the Split Mystery symbol converts into 2 pay symbols. There is a rare chance that a full screen of mystery symbols to appear to rank up your ways to win to an astonishing x100,000!

There is also a feature called Loki’s Mischief Modifiers. These can trigger three modifiers such as adding Wilds, Scatters, or Split Mystery Symbols. All of these features come with a cool visual of Loki enacting the effect. Don’t forget the emerald symbols! These trigger your favorite free spins during the game.

When you play Tales of Asgard - Lokis Fortune at Genting Casino, you are playing in a secure, and professional gaming environment. Whether you choose to play on mobile or on your desktop, you only get the most premium content and treatment here at Genting Casino.