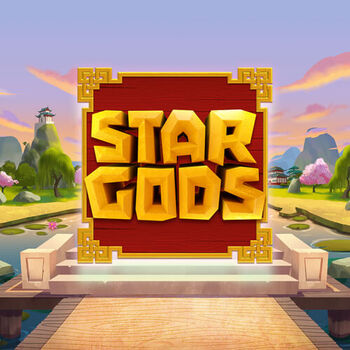 Ten paylines are available on the video slot Star Gods, which has a 5x3 grid. With the 10 active paylines that the game offers, the player can win up to 1,800x the stake in a single spin.The game's features are just as entertaining as its layout. The star wild symbol, which can appear on the three middle reels, comes first. It grows to cover the reel when it lands on one of them and transforms into a random god. When this happens, the Win Respin feature begins, which spins the reels continuously until a winning combination appears. The feature is repeated if the player lands another wild during the procedure.

The Bonus Spins feature, which is activated when the scatter symbol appears on the first reel and a wild sign appears on any of the middle reels, is another option. The player receives two extra spins and the wilds that started the bonus round are locked in place. It might not seem like much, but success is assured. Additional ones can be earned if none occur. The player might win between 2 and 5 extra bonus spins if the feature was reactivated.

Not to be forgotten is the Comeback feature, which can be triggered at any time throughout the bonus spins round. It is only possible if neither the feature has been retriggered nor there have been any victories. A single wild symbol must also be locked onto the reels. The game gives the player an extra two bonus spins if all the requirements are met. The range of bet sizes is 0.1 to 0.90.

You may play Star Gods at Genting Casino from any mobile device; just decide on a budget and register. Just be careful to play more than is actually necessary in order to win prizes.