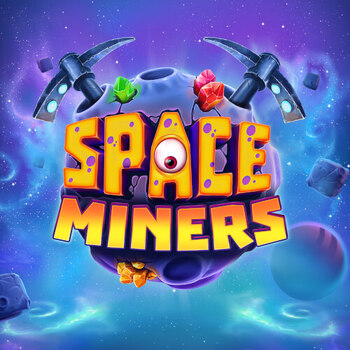 Held on what looks like an asteroid covered in mining equipment as cubes of rock and aliens float by, the view is exceptionally pleasing to the eye, made wondrous by a backdrop of nebulous gasses and cosmic dust as the universe slowly cycles through destruction and regeneration.

Strap in for a highly volatile ride as you destroy blocker tiles and grow the grid creating up to 1 million ways to win from the initial 729 at the start of the 6x3 panel paid game. The Return to Player is 96.47% with a minimum bet of 0.10 and maximum of 20.00 per spin. If available in your jurisdiction, players can buy their way straight to Free Spins for the cost of 100x their bet - buying this bonus increases the Return to Player to 97.14%. The pay table is dominated by 5 alien symbols as the higher value tiles, worth 0.6 to 5 times the stake for six of a kind. Four crystal gem objects are the lower value symbols on the tiles, each pulling in 0.4x the bet for six of a kind. This game features a box of crystals which is the Wild Symbol and can appear on any reel to substitute pay symbols. As mentioned earlier, it is the job of the Space Miners to destroy the blocker tiles which in turn allows extra symbols to come into play and increase the ways to win. Whenever a winning combination appears, a re-spin is awarded. In addition, any blocker tile next to a winning symbol is destroyed and removed for the re-spin, opening up more of the game board. When no new wins appear, re-spins end, and in the base game, the grid returns to its 6x3 size.

Space Miners is available to play on the browser at Genting Casino - as much as you will want to help these little creatures with their mission, always play responsibly and only bet what you’re comfortable with.