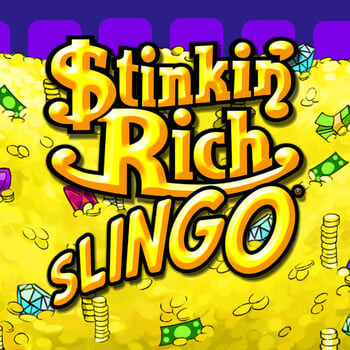 Produced by
Slingo
As you attempt to complete Slingos on your way to some smelly but generous financial rewards, Slingo Stinkin' Rich game gives you the chance to live the extravagant lifestyle of the wealthy and famous. There are also jackpots: three jackpot symbols activate the Smelly Rich jackpot, four make you Filthy Rich, and if you land five jackpot symbols, you'll have the ultimate honour of being called Stinking Rich. Be prepared to stink like a skunk because the more offensive you get, the richer you become. Play Slingo Stinkin' Rich for as low as 0.20 per spin.

A new version of the Stinkin Rich is called Stinkin Rich Slingo slot game. It was initially released by IGT, but Slingo has since expanded on its concepts with its bingo-based gameplay. As a result, the finished product resembles a combination of a bingo game and a slot machine in certain ways. The experience is undoubtedly one-of-a-kind and is perfect for any gamer who wants to venture outside of their comfort zone.

Theme-wise, Slingo Stinkin Rich slot online is a copy of the original Stinkin Rich Slingo, therefore it has skunks and a few other creatures in its wealth slot. Although it is an original theme, the designs haven't actually been updated, which results in an aesthetically pleasing experience.

The 5,5,3,5,5 grid is a replica of the King Show Games original video slot's reel layout. This is wonderful news since you just need three matches on the centre vertical Slingo and four matches on the top and bottom horizontal Slingos. There are also 12 winning combinations that you may get when playing Slingos because they encompass lines that go horizontally, vertically, and diagonally. Then there are the jackpots: landing three jackpot symbols awards the Smelly Rich prize, landing four makes you Filthy Rich, and landing five earns you the title of Stinking Rich. Be prepared to stink like a skunk because the more offensive you get, the richer you become.

It's not difficult to discuss anything about Stinkin Rich Slingo's mathematical model even though the game is so unconventional. However, we can inform you that you can play the game for bets ranging from 0.20 to 100. Additionally, we can disclose that the game's theoretical RTP overall is 95.72 percent.

Slingo Stinkin Rich online slot often plays more like a bingo game than like an online slot machine. You'll receive 10 bingo spins after choosing your bet, during which you must match the numbers on the reel with those on the grid. To advance on the paytable, you ultimately need to finish Slingos, which are five consecutive numbers.

Two postures that are automatically locked in from the beginning will aid you in achieving this. Additionally, you can come across Wilds, which let you mark any number on the current reel. On the other hand, free spin icons award you with an extra bingo spin. Super Wilds allow you to mark any number from the whole board, while Stinky Shoe symbols act as blocks.

Even while that amount would be substantial on its own, bingo spins occasionally result in Jackpot Overlays, which can award you one of the slot's three set jackpots. If you complete the bingo portion of the game with 5 or more Slingos, you'll be able to trigger either the Trash for Cash feature or the Free Spins feature, depending on the actual number of completed Slingos. Extra spins are available once you finish your base ones, but they come at a cost, so it's up to you to decide whether you want them or not.

In the basic pick'em game known as "Trash for Cash," you open trash cans to find bet multipliers in exchange for a hefty payoff.

On the other hand, the Free Spins function will direct you to Stinkin Rich Slingo's slot section where you can play the iconic Stinkin Rich slot for a certain amount of spins. It has the typical pairing of Wilds and Scatters, making it feel like a game within a game.

In the end, Slingo Stinkin Rich slot machine is such a distinctive experience that if you even somewhat enjoy bingo games, you should absolutely check it out. After all, it primarily functions as a bingo game, but if you collect enough Slingos during a round of play, you can convert it to a slot machine. Play Slingo Stinkin' Rich slot and win.