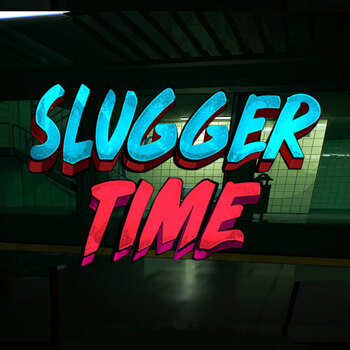 We stray to Slugger St, a hazardous street gang-controlled area. Chaos and anarchy are just the rules of the game in this perilous environment, where you must play your cards carefully.

20 fixed paylines that may be used to land winning combos of 3-5 matching symbols zigzag throughout the game's 5-reel, 3-row panel. The 10-A card ranks in graffiti style, which are worth 1.25x to 2.5x the stake for five, are among the low-paying symbols. The medium-paying symbols include nunchucks, shattered bottles, knuckle dusters, clown masks, chicken masks, and bunny masks. Five of them result in prizes that range from 5 to 40 times your initial bet. Be aware that one of Slugger Time's pillars are multiplier wilds. In the regular or bonus game, they might appear on reels 2, 3, or 4 and replace any pay symbol. In the standard game, multiplier wilds are given random values between x2 and x5, and if several wilds are utilized to produce a victory, the values are compounded before being applied.

The bets can be from 0.1 to 30. Set your gaming budget and register to Slugger Time on Genting Casino, playable on all mobile devices. Just make sure that you don’t play any more than you should in your quest to unlock rewards.